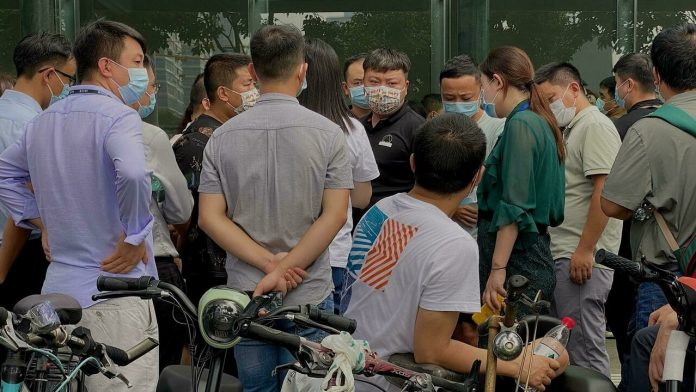 Protests against struggling Chinese real estate giant Evergrande spread to more cities in China on Wednesday after the company offered parking spaces or real estate to investors asking for their money back.

The giant company has realized that it may not be able to meet its obligations exceeding 300 thousand million dollars, which generates fear among buyers, investors and contractors of a bankruptcy that would have repercussions on the second world economy.

Dozens of protesters met again for the third day in a row in front of the Evergrande headquarters in Shenzhen, southeast China.

Among them were buyers of homes under construction who had already paid their money and feared that the property might not end up being handed over.

The band sang “Evergrande, give us our money back.” Although they did not encounter a strong police presence, the protesters did not want to disperse, especially angry after Evergrande apparently offered to pay off their debts with promises of purported property, parking or storage units.

“They gave us tents, kindergartens and parking spaces…but we can’t use them. None of us accept that,” said a woman who only wanted to give her last name, Wang.

The woman confirmed that her financial company is suffering due to the non-payment of the real estate developer’s debts.

Experts say the Hong Kong-listed company has more than a million properties paid by customers that are still unbuilt, adding to the nightmare feeling among Chinese investors, many of whom are first-time homebuyers.

Evergrande, one of China’s largest private companies and one of the world’s leading property developers, admitted Tuesday it was under “tremendous pressure” but ruled out bankruptcy.

On Wednesday, consulted by AFP, the company did not want to comment.

The real estate developer, whose rapid expansion into 280 Chinese cities has boosted its reputation, appears to be on the verge of collapse, although experts say the Chinese government will not allow a chaotic bankruptcy.

“The Evergrande bankruptcy could hurt consumer confidence if it affects the deposits that households pay for unfinished homes, but we assume the government will act to protect them,” rating agency Fitch said in a note this time around.

In Jiangsu Province (east), anxious investors gathered Wednesday morning outside the company’s offices in the city of Taizhou.

Similar protests erupted in Anhui province and workers protested against their wages in the city of Igo in Hubei, also in the east of the country.

Concern is growing among unpaid sellers — some in Shenzhen claiming they owe nearly $1 million — as well as among investors who have relied on the proceeds to pay their debts and pay their employees.

On Wednesday morning, a woman was crying desperately on the floor in front of the Evergrande Building in Shenzhen.

“They are trying to negotiate their bad properties. They are products they cannot sell,” an investor who declined to be identified told AFP.

It is very rare for the communist authorities in China to allow any kind of protests, especially in several cities at the same time.

Social media, which is usually strictly controlled by one party, was caught on Tuesday by images of the demonstrations.

Experts say this permissive approach could signal the Chinese government’s desire to show public opinion that it is on its side as it considers the next steps to take.

Evergrande was founded in 1996 by Xu Jiayin, who became the richest man in China during the country’s real estate boom in the 1990s.

In those years it invested in massive promotions in new cities and in 2009 raised $9000 million in its initial public offering in Hong Kong.