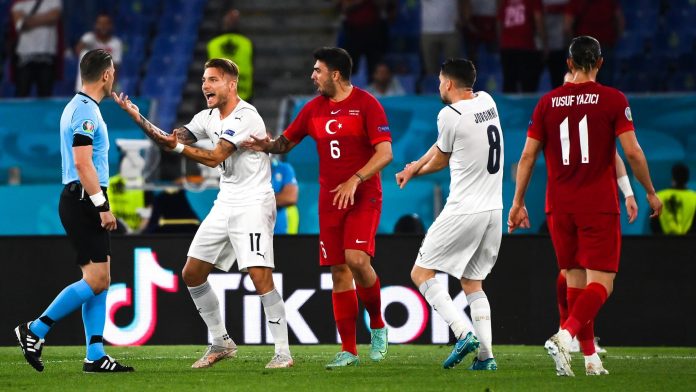 The Italian players, who faced Turkey in the Euro opening match, demanded a penalty just before half-time for a Jackie Celic hand. The referee, Dutchman Danny McKelly, did not blow the whistle, based on the new rule in force.

It did not take long for the controversy over the refereeing to erupt in the euro. The Turkey-Italy opening match, played in Rome on Friday night, frustrated the Nacionale players, believing they should have been penalized just before half-time.

The action in question took place in the 44th minute. After an overflow on the left, Leonardo Spinozola was seen diverting his retreating centerpiece from the hands of Jackie Schelick with France’s Turkish side champion Lilly.

The referee followed the new rules

The main referee of the match, Dutchman Danny McKelly, then briefly interrupted the match to discuss with his video assistant Kevin Blom (VAR). After a few seconds, without a control screen at the edge of the field, without consultation, the verdict was reached: no penalty.

Was this a good result? A Priory, yes. The new rule, which applies to the hands, states that “no contact between the ball and the hand or a player’s hand must be illegal.” To determine, the arbitrator must determine whether the position of the hand or arm is justified. “The position of a player’s arm or arm is considered to be an artificial increase in his or her body or closed area when it is the result of movement of his body in that particular situation or not justified by such movement”, the text said.

By reviewing the images in the VAR control room, video assistant Jackie Schelick assumed he was in proper condition. Her hand, though it was clear from the body, seemed to be part of a natural movement.

Another dispute in the previous game

Earlier in the game, in the 20th minute, the Italians had already complained after Siro involuntarily handed over from Choiler Science in a severe strike from Immobile. Again, probably right, the referee allowed the game to continue.