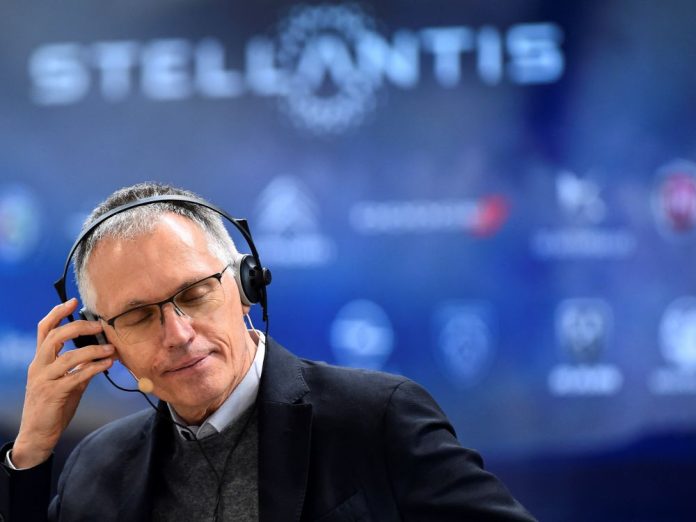 PARIS (Reuters) – The bonus amount for Stellantes CEO Carlos Tavares for 2021 sparked controversy in the French political class and some unions on Wednesday, while the general meeting of shareholders of the auto group born in a merger between PSA and Fiat Chrysler (FCA) must make a decision in the afternoon. on this point.

After welcoming the transfer of PSA and then successfully merging with the FCA, Carlos Tavares must be awarded compensation for the past financial year of approximately 19 million euros, including 2 million in fixed salary and 1.7 million in exceptional bonus. Related to the merger, the balance consists primarily of performance-related variable compensation.

A spokesman for Stelantis denied the €66 million made by Vitrust, calling it “a lie”.

“The real compensation for 2021 is around 19 million euros. The rest are hypothetical items over the long term, up to 2028,” the spokesperson said.

A few hours after the General Assembly, and in the political context of the inter-round rounds of the presidential elections in France, the subject nonetheless caused a reaction.

“It is an indecent and disgusting reward,” was judged by RMC Jean-Pierre Mercier, representative of the union CGT, PSA’s third union, acknowledging that despite the difficulties it faced in 2021, which were particularly marked by the shortage of semiconductors and The fallout from the COVID-19 pandemic, the group has reported strong results.

For the government, the decision is up to the shareholders

In response to a question on the sidelines of a trip to the outskirts of Paris, Marine Le Pen described the amount of this fee as “shocking”.

“It is shocking, but it is less shocking than the others,” the candidate of the National Rally told reporters, stressing that this reward was associated with “one-time good results”.

In the camp of outgoing President Emmanuel Macron, his opponent on April 24, government spokesman Gabriel Attal noted on BFMTV and RMC that “it is a private company and that shareholders ultimately decide and vote”, stressing that this demonstrated the need for better European coordination for regulation. And moving forward the issue of value-sharing in companies.

“Of course, these are extraordinary numbers,” he explained in the Cabinet’s report at noon.

Phitrust, which announced last week in a press release that it had voted against Stellantis’ 2021 compensation report, also expressed in this text its reluctance regarding such compensation.

“Is this higher bonus among the big companies in France (and possibly EU-listed groups) justified for someone who is not the founder of the company, but only its director?” Ask the management company.

“Is this very high wage socially justified at a time when the group will likely have to face massive restructuring with job cuts as a result?” she adds.

Phitrust believes that the public authorities bear responsibility for this issue given that the French state is the third shareholder in Stellantis, notably via Bpifrance which holds 6.15% of the capital.

See also  New paper sheets to celebrate the 20th anniversary of the euro? - RT in French

The group’s general meeting will be held by videoconference from the Netherlands, where it is based, from 3:00 pm (1:00 pm GMT).

(By Miriam Rivette and Gilles Guillaume, Edited by Bertrand Bossi)