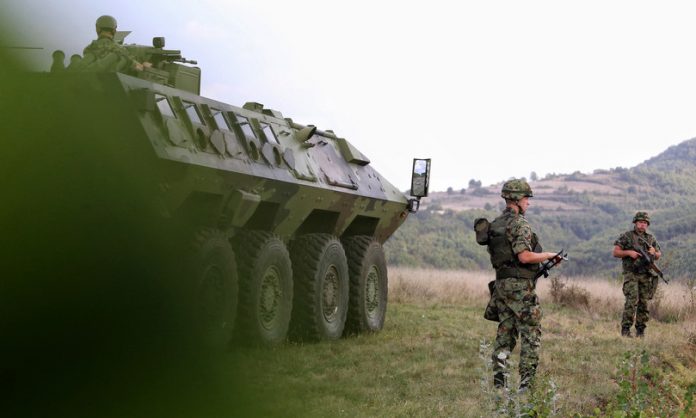 AGI – NATO forces stationed in Kosovo announced Monday that they have stepped up patrols in Kosovo after rising tensions with Serbia. Belgrade sent armored vehicles to the border, near the north of its old province, in response to what it called “provocations” in Pristina, namely the recent deployment of special forces from Kosovo near two border towns in the north of Yaringi province. and brinjak. Northern Kosovo is inhabited by a majority of Serbs who reject the authority of the Pristina government.

Special units were sent from Kosovo to oversee Pristina’s decision to force Serbian vehicles to install Kosovar temporary license plates when entering its territory. Cars registered in the “Republic of Kosovo” – not recognized by Belgrade – have been forced for years to hold Serbian number plates temporarily to enter Serbia and Pristina has demanded a measure of “reciprocity”.

According to NATO, the situation on the border is calm despite the maneuvers in Belgrade, which also sent military aircraft to fly over the border. The international community, starting with the European Union, has called for “de-escalation” and “dialogue” in the face of renewed tensions between Kosovo and Serbia, which has never recognized the territory’s independence with a large Albanian presence. The majority, announced in 2008.

A few days ago, hundreds of Serbs blocked the roads leading to the two border crossings in protest. Over the weekend, two vehicle registration offices in Kosovo were attacked by protesters and Kosovo Prime Minister Albin Kurti accused Serbia of wanting to “stoke a conflict”.

The Balkan delegation, the President of the European Commission, Ursula von der Leyen, will leave Tirana, which intends to pave the way for the EU-Balkan Summit on October 6 and will visit Pristina and Belgrade. “It is important for the two parties to sit down together, to put an end to the verbal escalation in the region, and to find a quick solution,” UNHCR spokeswoman Diana Spinant said.

Kurti said he was ready for dialogue with Serbia under the leadership of the European Union, which has been trying for ten years to help the two rivals normalize relations. But the Serbian President, Aleksandar Vucic, stipulated the resumption of the reconciliation process with the withdrawal of Kosovar special forces from the north of the province. After meeting with Western ambassadors, Vucic insisted: “We are committed to maintaining peace,” but “we will never allow Serbia and its citizens to be humiliated.”

Analysts say this is not a favorable period for compromise, as Kosovo and Serbia face election deadlines. An administrative vote is expected in Pristina in October, while political elections will be held in Serbia next year.

Mali: The West condemns the deployment of Russian mercenaries – Ultima...

Biden, the Communists and Ddl Zan: What the Pope’s Week Reveals