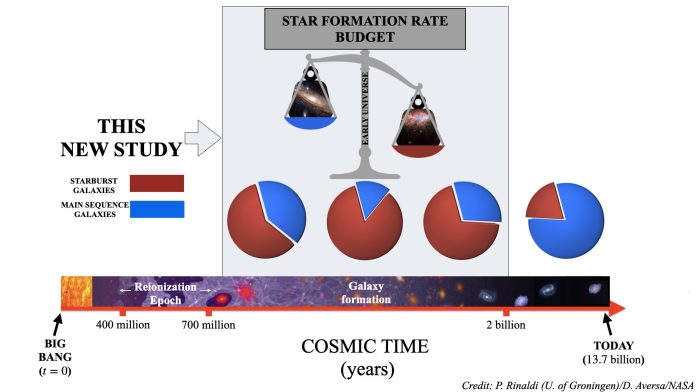 In the first few billion years after the Big Bang, the universe contained much more so-called star galaxies than models predict. It appears that up to 60 to 90% of stars in the early universe were caused by galaxies that underwent a growth spurt. This is shown by the analysis of more than 20,000 distant galaxies. The team led by astronomers from the University of Groningen (Netherlands) will soon publish its results in Astrophysical Journal.

Starburst galaxies are growth spurt galaxies. They produce more stars than usual in a relatively short period of time. The stellar growth spurt lasts from 10 to 100 million years. Galaxies often live for billions of years and can go through several bursts of growth. To cause a growth spurt, a sudden influx of gas is needed, otherwise the building blocks of new stars will soon run out. Such a flow can occur, for example, when two galaxies approach each other.

A research team led by Pierluigi Rinaldi, Ph.D. A student at the University of Groningen (Netherlands), he studied the data of more than 20,000 distant galaxies. This data was collected in recent years with the Hubble Space Telescope, using the MUSE instrument on the European Very Large Telescope in Chile and the Spitzer Space Telescope. Telescopes looked far back in time until researchers were able to study galaxies that formed 11 to 13 billion years ago. The Big Bang was 13.7 billion years ago.

Analysis shows that in the first few billion years after the Big Bang, about 20-40% of star-forming galaxies were starburst galaxies. These galaxies in their growth spurt accounted for 60 to 90% of the new increase in stars. By comparison, the universe today is much quieter and only about 10% of new stars are born in starburst galaxies.

Furthermore, the analysis shows that growth spurts occur more often in smaller galaxies than in larger galaxies. It even appears that many small star galaxies have been captured by telescopes only when they are in the process of formation. “In this sense, you can compare it to a growth spurt in humans. This is also stronger during childhood,” Rinaldi says.

The results came as a surprise because until recently, stellar galaxies were considered unusual and of minor importance in the formation and growth of galaxies. “Even the latest and most advanced models of galaxy formation did not predict this,” Rinaldi said. “It seems likely that physical processes occur on a scale too small for models to explain them.”

Karina Capote (University of Groningen), Rinaldi’s supervisor, adds: “Of course, it gives us something to think about in terms of these models. And that’s a good sign.” In the coming period, Caputi wants to further investigate the origin and evolution of the first galaxies. It can do so because it recently received a NWO Vici grant and because the James Webb Space Telescope will also focus its mirrors on distant galaxies.

Submitted by the Netherlands Research School of Astronomy

the quote: The early universe is full of star galaxies (2022, April 4) Retrieved April 4, 2022 from https://phys.org/news/2022-04-early-universe-brittled-starburst-galaxies.html

See also  Toyota May Showcase GR Sedan, Could It Be GR Camry?

The Elden Ring leak is said to show gameplay on Xbox...