Persia Digest
Home Economy The James Webb Telescope has been launched into space, ready to see... 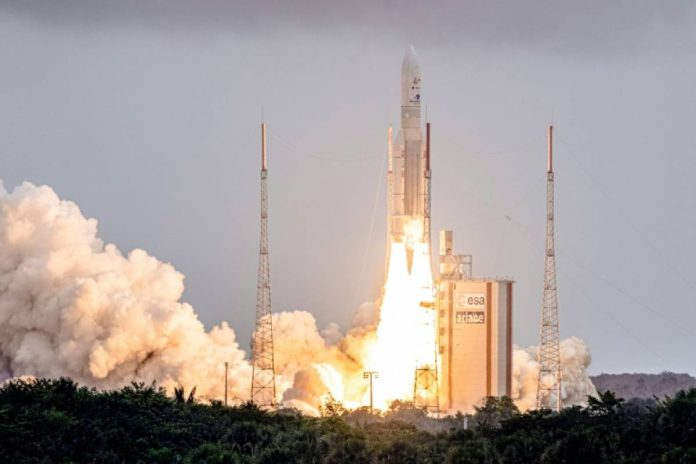 “It’s a real Christmas gift,” Thomas Zurbuchen, chief of NASA science missions, who built the JWST in collaboration with the European Space Agency (ESA) and Canada (ACS), said at a press briefing.

The Director General of the European Space Agency, Josef Asbacher, congratulated himself on the fact that the Arianespace rocket, which “worked very well”, “put the spacecraft very precisely into orbit.” An important point, because proper injection into orbit provides the fuel that James Webb will need to reach his end point and then power up.

An image provided by NASA on Dec. 25, 2021 of the James Webb Space Telescope separated from an Ariane 5 rocket after liftoff from Kourou Space Center in Guyana (NASA TV/-)

Immediately after take-off, the telescope flew over the Atlantic Ocean, then Africa, until the final separation, which occurred at an altitude of 1,400 km and a speed of more than 34,000 km / h. An onboard camera on the top floor of Ariadne showed this class and especially the deployment of James Webb’s solar panels.

This critical process will follow a second, about twelve hours after liftoff, with the first of three course corrections to reach its position at 1.5 million km.

This will take about a month to achieve. With the ambition to shed more light on humanity in two questions that torment them: “Where did we come from?” and “Are we alone in the universe?”.

Thus we see the glimmer of the “cosmic dawn”, when the first galaxies began to illuminate the universe since the Big Bang, 13.8 billion years ago.

It will make it possible to better understand the formation of stars and galaxies, to observe exoplanets from which astronomers are discovering more and more samples, perhaps to one day identify other planets.

James Webb will follow in the footsteps of the Hubble telescope, which revolutionized the observation of the universe: thanks to it, scientists discovered the presence of a galactic black hole in the center of all galaxies, or water vapor around exoplanets.

Imagined by NASA since Hubble’s launch in 1990, the James Webb Space Telescope is different in more ways than one.

The size of its mirror, with a wingspan of 6.5 meters, gives a surface area and therefore a sensitivity seven times greater, which is enough to detect the heat signature of a bumblebee on the moon.

Another difference: the method of observation. Where Hubble observes space primarily in the visible light field, James Webb ventures into the wavelength that eludes the eye: the near and mid-infrared. Radiation that any object, star, human or flower emits naturally.

This light will be studied by four instruments, equipped with imaging devices and spectrophotometers to better dissect it. Their development mobilized a large number of engineers and scientists, under the leadership of American and European laboratories and industrialists.

“Looking at the same objects (as with Hubble), we’ll see new things,” said astronomer Pierre Ferrouette, co-head of science for the European Space Agency telescope in Paris. For example, the first galaxies, objects that are after turned their lights red. Or the colonies of young stars that grow hidden in the clouds of dust in their nurseries. Or the atmosphere outside the solar system.

A prerequisite for the proper operation of the JWST is an ambient temperature that is too low to interfere with light inspection.

The main mirror of the James Webb Telescope at NASA Center in Houston, Texas, on May 16, 2017 (NASA/Chris John)

Hubble orbits at an altitude of 600 km above Earth. At this distance, JWST would be unusable, heated by the Sun and its reflection on Earth and the Moon.

It will be placed at the end of a one-month journey 1.5 million kilometers away. It will be protected from the sun by a heat shield consisting of five flexible heat-dissipating sails that lower the temperature (80 degrees) to -233 degrees on the side of the telescope.

But before getting there, the machine and its designers will have to achieve a real breakthrough: its flawless deployment, with a series of operations that includes, for example, for the shield alone, 140 opening mechanisms, 400 reels and nearly 400 meters of cable. .

Because the observatory, 12 meters high and a shield equivalent to a tennis court, had to be folded to slip into the Ariane 5 cover. The “wrapping” was carried out with laser guidance to avoid any damage to the device, a development that cost about ten billion dollars was developed.

For these maneuvers, NASA also enforced extreme hygiene measures to avoid any contamination of the telescope mirror, by particulates or even charged breathing…

It will take several weeks to see if the telescope is ready for use. With formal entry into service scheduled for June.

Chow! Alitalia makes its last trips and retires after bankruptcy