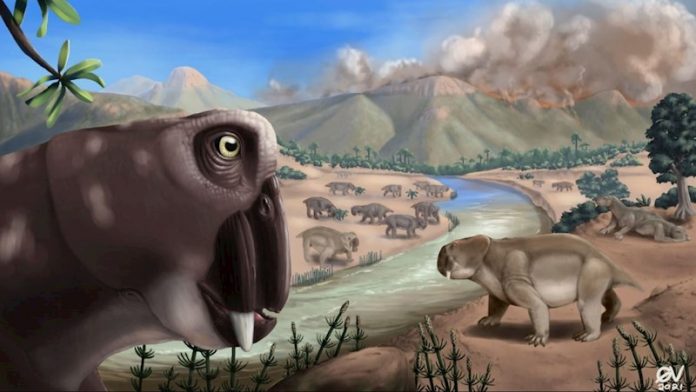 Science Newsroom, April 19 (EFE). 252 million years ago, massive volcanic eruptions caused climate change that wiped out most of the Earth’s species and made way for the age of the dinosaurs. It was the largest mass extinction on the planet. Today’s study shows that this catastrophic event was faster in the oceans than on land.

“This is the first work to really focus on vertebrates and the first to show that what happened in the terrestrial environment was unique,” says Ken Angelchik, a paleontologist at the Field Museum and lead author of the article published Monday in the magazine. Proceedings of the National Academy of Sciences of the USA (PNAS).

So far, studies have focused more on marine extinctions because thanks to the protection of sediments, the underwater fossil record is more complete and abundant.

Thanks to this, it is known that the mass extinction occurred at the end of the Permian, and that in 100,000 years they wiped out more than 85% of marine life.

But even though it looks long, it is very small geologically: 100,000 years in 3,800 million years of life’s origin, which equates to 14 minutes per year.

To find out what happened to life on Earth, the authors examined fossils of 588 quadrupeds that lived in what is now the Karoo Basin in South Africa at the time of the mass extinction.

The researchers created a database and separated the fossils by age, and collected samples at timescales of 300,000 years, which allowed them to determine the appearance and disappearance of different species and observe the big picture of life throughout the weather.

One species that helped uncover patterns of extinction and recovery was Lystrosaurus, a herbivorous mammal with a beak and fangs, the size of a dog or cow – depending on the species – and one of the so-called “disasters”, a group that thrived when life was in trouble.

“We saw that Listerosaurs were abundant before and after the extinction,” says Pia Vigleti, a researcher at the Field Museum in Chicago and co-author of the study, possibly because it adapted to the environmental changes that caused the species to go extinct.

Examination of fossils showed that the Permian extinction was much longer on land than in the oceans.

After the previous comparison, if the history of life on Earth was one year and the extinction of the ocean was for 14 minutes, then on the surface of the Earth it was two hours and twenty minutes, that is, more than ten times that of water.

The authors believe that the keys to this difference could lie in the oceans, which are able to absorb chemical changes and temporarily stabilize them.

Thus, as with the current climate crisis, the oceans were able to absorb a large amount of carbon dioxide or increase the temperature before the ecosystem collapsed.

Therefore, the authors warn that understanding what happened in the mass extinction at the end of the Permian period gives us clues about the emergence of dinosaurs as well as about current climate change.