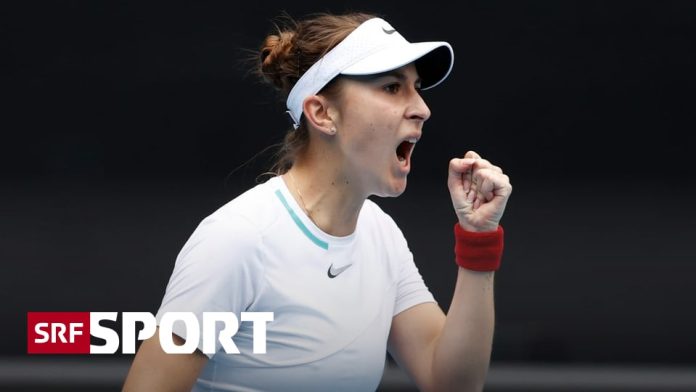 Belinda Bencic made the best possible participation in her first Grand Slam tournament of the year. 22nd seed Olympic champion Kristina Mladenovic of France (WTA 91) defeated France 6:4, 6:3 in the first round.

The Swiss eastern player showed off a varied match against Mladenovic, who she counts among her friends but not her favorite opponents on the tour. But not everything went according to plan at Bencic, she still has to work on some construction sites with a view to the next rounds. The 17 winners face an equal number of easy fouls.

The essence of the match came in the first set when the score was 4: 4, 15:30 from the point of view of Bencic, who was serving. Mladenovic was dominant at this point, often using her front hand to push in rallies. Bencic, with his back to the wall and two break balls in front of him, played a forehand across the edge of the net into the opponent’s court and scored very well.

With the Swiss winning the match a little later, her French opponent seemed to be a little upset: Bencic took advantage of it calmly, taking the break to zero and with it the first set.

In the second round, the 24-year-old led 2-0 early on. She immediately responded to a new break with another service hack on her part. Not much came from Mladenovic, especially towards the end of the second set – after 89 minutes Bencic converted his first match point to victory.

In the second round on Wednesday, she will meet the young American Amanda Anisimova (WTA 61), who beat Dutch qualifier Ariane Hartono (WTA 191) in 3 sets. Bencic won his only duel with Anisimova so far in 2019 at the Turf Championships in Mallorca.