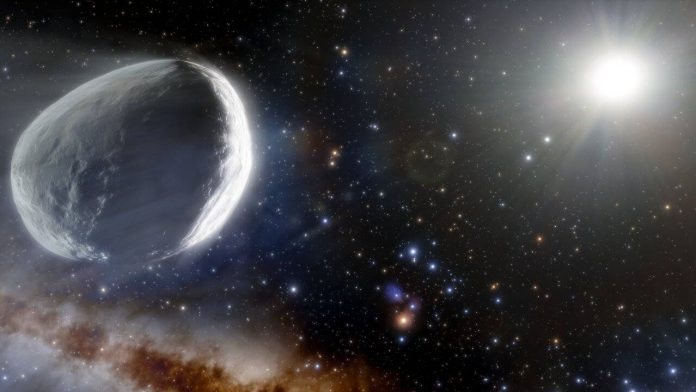 Reviewing data from the Dark Energy Project, a massive comet named C/2014 UN271 (Bernardinelli-Bernstein) has been discovered. Its diameter ranges from 100 to 200 km, and in 2031 it will approach the Sun at a distance slightly greater than that of Saturn, and from there it will return to the limits of the solar system.

Astronomy scientists Pedro Bernardinelli y Gary Bernstein from the University of Pennsylvania (USA) discovered a giant comet after looking in detail at the data from Dark Energy Survey (DES). This project studies dark energy using a camera decade Mounted on the Víctor M. Blanco Telescope of the Cerro Tololo Inter-American Observatory in Chile.

The Little Planet CenterThe National Astronomical Union responsible for naming this type of object named it a comet comet C/2014 UN271 (Bernardinelli-Bernstein) For the year it was first recorded and the name of its discoverers.

Comet C/2014 UN271 (Bernardinelli-Bernstein) is between 100 and 200 kilometers in diameter and has now been detected by reviewing observations made a few years ago with a camera from the Dark Energy Survey (DES) project.

Astronomers estimate that the magnitude of this magnitude, unlike any other measurement we’ve seen before, lies between Diameter 100 and 200 km, about ten times more than usual. Estimating its enormous size depends on its albedo and the amount of sunlight it reflects.

During six years of DES project observations (between 2013 and 2019) 300 million galaxies have been mapped in 5,000 square degrees of the night sky, but many more have been observed as well. Comets and Trans-Neptune Objects (TNO) that passed through the analyzed domain. These objects are icy objects that lie outside the orbit of Neptune.

You can also read: Take the first pictures of the separate aurorae of Mars

a An expert in this kind of thing, astronomer Carlos de la Fuente Marcos of the Complutense University of Madrid (UCM), contextualizes the findings of Cinque colleagues: “Despite observations made a few years ago, the object was recently identified when a reanalysis of the DES data, by algorithm which links unrelated or isolated observations to the use of statistical procedures.”

“When the discovery was announced – he continues – two things were clear: that the object was moving in Very eccentric orbit, of the comet type, and its size can be similar to that of centaurus The greatest acquaintances, like Chiron and Cariclo.

“Some call it a ‘megameter,’ but Chiron and Cariclo could be the same size and have both shown comet activity (with commas and tails) in the past,” the astronomer warns, It wouldn’t be the first known giant cometand does not appear to be an object of interstellar origin.”

In the 2018 images, this object didn’t show what we see now: its cometary coma and proto-tail, which means it’s a comet activating as it approaches the sun.

The Kites They are icy bodies that evaporate as they approach the heat of the sun, causing their coma (the cloud of dust and gas that surrounds their core) and their tails. DES images of the body between 2014 and 2018 did not show a typical comet tail, but only a day after the Minor Planet Center announced its discovery and use. The global telescope network of Las Cumbres ObservatoryAstronomers took new pictures of Comet Bernardinelli-Bernstein, which revealed the presence of a coma. This has grown in the past three years, and thus the body has officially turned into a comet.

“In the DECam images, the body was very red, but not active (it had no coma and no tail), and was not gray or bluish like the active ones, but within days of being announced it was observed from Namibia, Australia and New Zealand, and all images show now file Guilty zombie and newborn tail“So the body was activated between 2018 and 2021 when it got closer to the sun and its surface got warmer,” says de la Fuente.

Five mammoths from the Ice Age have been discovered