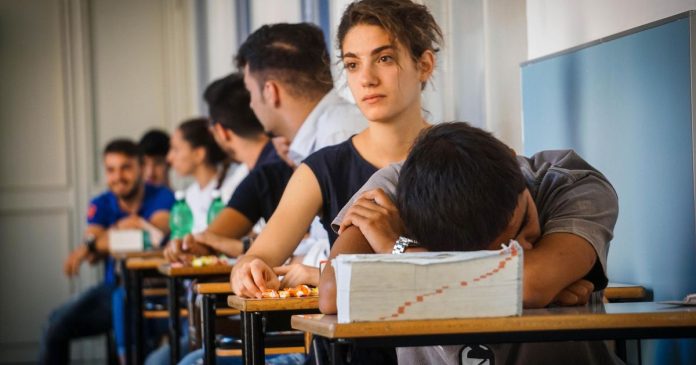 Progressive performs poorly. There is a big crisis and people no longer know when we will go to this land: So, at least, the prophet of Quelo, better known as Corrado Guzzanti, would have said so, and the sentence has the advantage of being non-grammatical enough to make it an invitation to talk about school. Because, as we know, children no longer know how to write, and Secretary Bianchi has done well to reintroduce the old “topic” dear to all kinds of schools. Indeed, the new state examination, in addition to the “Diploma thesis”, which will be prepared in the last months of the academic year, will include the traditional oral interview and, in fact, the Italian test, on topics which I imagine are relevant to the individual titles of study.

While the commentators were practicing the evergreen state exam, which now disturbs the sleep of everyone but high school students, it occurred to me to think of the Amazonian tribe of Nambikwara. I have no particular anthropological skills, in fact, and I would not have met the indigenous peoples of Mato Grosso (Brazil) if I had, in the field, of the study of their family and social life, Claude Lévi-Strauss, and if, above all, the philosopher Jacques Derrida had not read some of his annotations ( More than fifty years have passed), but the writing lesson provided by the first comment and the second commentaries are not without some benefits.

It is, in fact, about writing. Nambikwara, to whom Lévi-Strauss travels – he travels in the depths of the tropical forest – gives papers and pencils, they cannot write: they are not in such bad shape as our boys, it is true, but the cracks and punctuation in the gourds in any case will not make our teachers happy, nor They are considered writings even by a French anthropologist. In other words, the Nambikwara are ‘people without writing’, without pen and inkwell (and then without printing and computer): they live outside great Western literacy. Yet among our children one fears that they will come later, irreparably later, that they are behind and that they no longer know how to write decently or read a book. This is the complaint in Riccolvi and Masculavi’s book, School Harm, about the untold disasters of the school of mass democracy.

However, Derrida reads Lévi-Strauss and Objects: You have to have a certain form of writing in mind, to say that the “line composition” of the Nambikwara small group does not write. You have to draw a clear dividing line and say yes, that’s writing, whereas the Aboriginal line is, if anything, scratch, scratch, carve, tracing, stamp, engraving, but definitely not writing.

The things Derrida has to say about anthropology’s meeting with the aborigines (and their cunning tribal chief) are too many to fit into this article. But we can also draw a few lessons from them: not only do our children know how to write in relation to a particular idea of ​​writing, which is not only their own but it is not always clear why and to what extent. Should it be?

For the avoidance of doubt: I am very happy with the revival of the Italian idea. But I am less convinced by the arguments generally used to complain about the unstoppable deterioration of the educational establishment. As if yesterday we all knew how to read, write and count, while today no one knows how to use semicolons, conditionals and divisions anymore. In the first place, I am afraid, it was not considered that the school of the past, in hindsight, was not a school for all at all, because not everyone went to school: those who leave school today without knowing logical analysis before, at school most of them did not go to it Even. Secondly, I suspect the need to move the writing boundaries at least a bit, to also include “composition of lines” – so to speak – on TikTok or in who knows other digital jungles that are not taken into account at all. And it’s not just a dark forest, but sometimes a new narrative forest (with all due respect to Umberto Eco, who didn’t like it very much).

All this, I doubt to say, does not mean that everything has to be valid on a state exam: the school remains the school, and fortunately, TikTok remains TikTok. But reading this subtraction only mutual exclusion is not wrong: it is a loser. How to lose the idea of ​​the school institution (I dare say: of any institution) when one pretends to defend it by comparing it to the development of customs and society. In general: for the movement of life. It is believed to maintain its function; In fact, he is to blame. It is the real fear that we must feel over the fate of education.

I finished. Perhaps there was no need to bother ethnoanthropology to come to a simple common-sense conclusion. But it was useful to measure the distances, in fact I would say roughly the head and tail that sometimes occur throughout history: then stories of voyages into the sad tropics can be useful to denounce, with anti-establishment fervor, the sacred. the alliance between writing (or class culture) and power; Today, on the other hand, this alliance must somehow be restored. I said it: Progressivism is going really bad. Well, that was a mistake; But I have the impression that in the opposite direction, this is wrong so far.