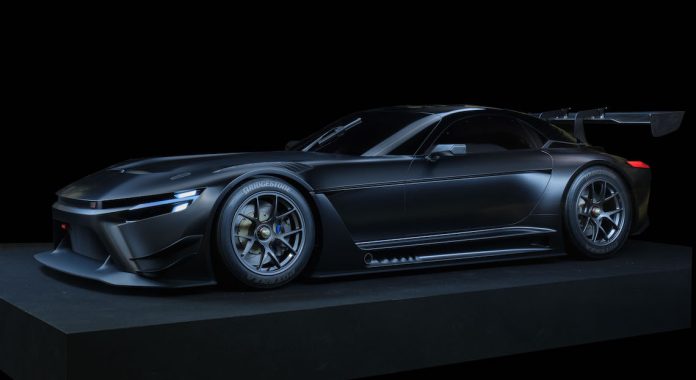 For the Tokyo Motor Show, Toyota is unveiling a new concept dedicated to competition: the GR GT3. A fact that will soon be discovered in the ring?

After a teaser in the dark a few days ago, Toyota officially revealed its new racing concept at the Tokyo Motor Show. Branding started from a blank page To create the stunning GR GT3.

As seen through the humor, the GR GT3 concept is not based on any production model and has its own personality. The study opts for a very long horizontal hood and a back facing compartment, very short and bundled. This is reminiscent of the current Supra, but also of the Mercedes-AMG GT3. Very precise optics are installed on the front part, which takes advantage of the blade and fins. In profile, we can note the central locking wheels and exhaust system, which proves that the car should use a heat engine. The stern was equipped with a huge spoiler, a majestic diffuser and a light strip over the entire width of the hull.

Will he have a future?

Toyota unfortunately does not reveal any technical information about the concept. The 6 engine could be a reworked Supra, a V8 from a Lexus RC F GT3 Or from a completely different block. It remains to be seen whether this concept will truly be available as a competition vehicle in the coming years, or even whether it will inspire Toyota for a new supercar…

Toyota and Lexus reveal their electric strategy with 16 concepts