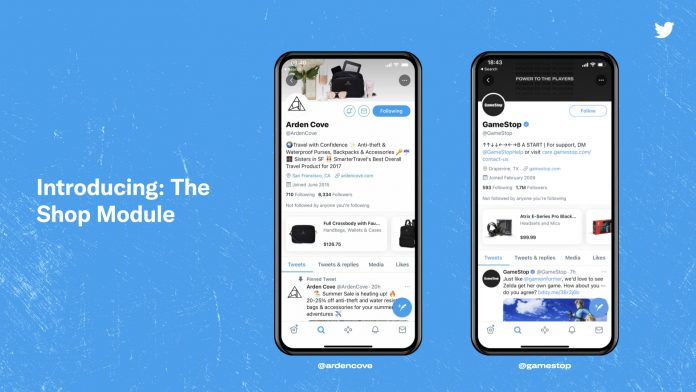 The Blue Bird social network is testing a new functionality that will (almost) turn it into a shopping platform.

Twitter just announced the arrival of a new feature on its network; shopping unit. This feature is currently being tested in the US and only on iOS, it allows users to simply purchase products from Twitter. Blue Bird social network follows in the footsteps of Facebook, WhatsApp and Instagram.

We still notice a significant difference compared to the shopping functionality of Mark Zuckerberg’s social networks: no transaction goes through Twitter. The latter serves as a branding display. They can simply post offers on the social network that link to their websites.

Thus, the Shop Module allows businesses and merchants to highlight their products on their Twitter profile. They will appear above their first tweet, in a circular shape, like what we can see on Google.

We are testing the Shop Module on iOS. Get the products you want from the places you love – straight from the brand’s profile. pic.twitter.com/2ZS8v7NIWs

At the moment, dozens of American brands are already taking advantage of it for free. Twitter does not charge merchants to display their products on its platform, but that may change once the tests are complete.

In the long run, Twitter can actually bill its services to companies that will take advantage of the social network’s popularity to attract customers and generate sales. The social network is also likely to receive a percentage of every sale made from its platform. Either way, it will be another cash flow for Twitter.

See also  How to watch Destiny 2 in Australia, and what to expect

Twitter has been relying heavily on ads for a while to diversify its revenue streams. This is also the reason why the social network is preparing new paid options.

With Twitter Blue at €2.99 per month – Subscription is only available in a few countries – Users can take advantage of additional features, including the ability to delete a tweet a few seconds after it has been posted. They can also arrange tweets according to specific categories.

Twitter was also implemented recently classified information system. Internet users can already support their favorite creators, influencers or idols by sending them money. Here again, the functionality is still very limited, but we can imagine that it will soon be deployed on a global scale. More and more social networks offer this type of functionality to attract content creators to their platform.

In any case, you will have to be patient to take advantage of one of the new Twitter features or the other. One thing is for sure, the social network is testing a lot of new things to be less dependent on ads.

After 15 years of waiting, the European Space Agency’s ERA arm...