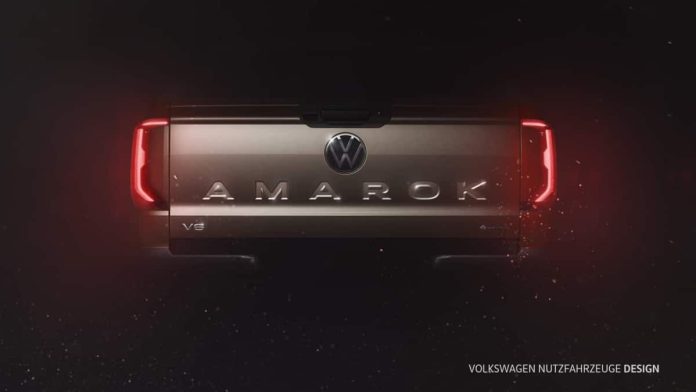 The new Amarok does not go unnoticed. Volkswagen’s top-of-the-line commercial vehicle pickup will soon be introduced in the world – and the hatchback will attract attention. His name engraved on the metal is honored in a short video.

Pick-ups are masterpieces that carry a real payload. In many parts of the world you cannot imagine life without it – both in the commercial sector and for people who have … huge hobbies. So that no one is ignorant of the loading capabilities of this car – even in off-road driving, the name of the model will appear engraved on the tailgate in large and clear letters, like a new design element.

Depending on the model and specifications, the Amarok’s new luggage compartment can accommodate up to 1.2 tons of cargo volume. Likewise, additional engine and gearbox variants allow a maximum towing load of 3.5 tons. On some models, the name “Amarok” also appears on the front of the car.

In addition to the lamps of intelligence. Light, which has already been presented to the public, Volkswagen’s new sports commercial vehicle pickup has amazing design and engineering elements. Among them, the name of the car is engraved in modern letters on the tailgate. Something that makes an impression, leaves no doubt for the driver of the following car: it is indeed the new Amarok! Other items will be revealed in the coming weeks.

On the path to success

To date, more than 830,000 copies of Amarok have been sold in Europe, South America, South Africa and Oceania. The advantages of this luxury pickup truck from Volkswagen Commercial Vehicles are many: high-quality steering, high loading capacities, a wide range of features and a confident silhouette – on and off-road. Volkswagen Commercial Vehicles enhances these features in the latest generation of the vehicle. The new Amarok will go on sale at the end of 2022 in a small number of countries, in a four-door DoubleCab version, as well as in a few markets a single-door version (SingleCab).

Europe scandal: the state files a complaint after the administrative report