“In the unusual family of cars, I’d like to have a Volkswagen Combi T1 tracked! The Volkswagen division Nutzfahrzeuge Oldtimer just presented the extremely rare Volkswagen Combi T1 with 8 wheels and tracked, “Fox caterpillar” or, in French, “tracked fox” This 1962 Combi T1 is once again ready for adventure, very far, off the beaten track.

That’s why the Volkswagen Combi T1 tracked car celebrates its 60th anniversary this year. For the record, it’s painted orange, matching another great machine, the Citroën Mille Pattes Michelin, which this year celebrates its fiftieth anniversary. We owe the “Caterpillar Fox,” meticulously equipped with caterpillars only for its four rear wheels, to Kurt Kretzner, an experienced mechanic who loved the Combis at the time. In the early 1960s, few vehicles were able to venture into the snow. Passionate about skateboarding, this idea was given to genius Kurt Kretzner. According to our information, the latter could have turned another Combi T1 into a tracked mobile home. 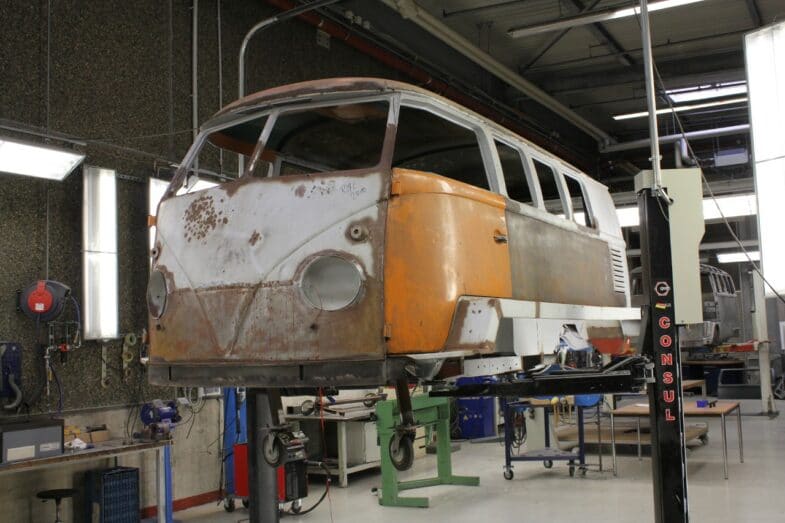 The Volkswagen Combi T1 was completely restored “from top to bottom” at the factory in Hanover, Germany, rolling off the assembly lines in 1962. As you can see from the photos illustrating this article, the “Caterpillar Fox” has a wider body than other Combi T1s in the the sixties. 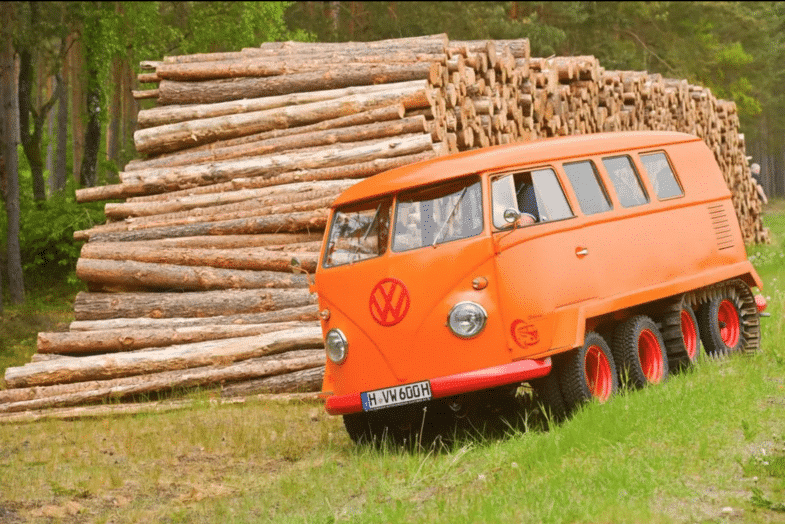 For the small story that quickly became big for the German manufacturer, the term “Combi” was born from the shrinking “Kombinationenwagen “which can be translated in French as:”Multifunctional”. This is already the case for the “Fox Caterpillar”. 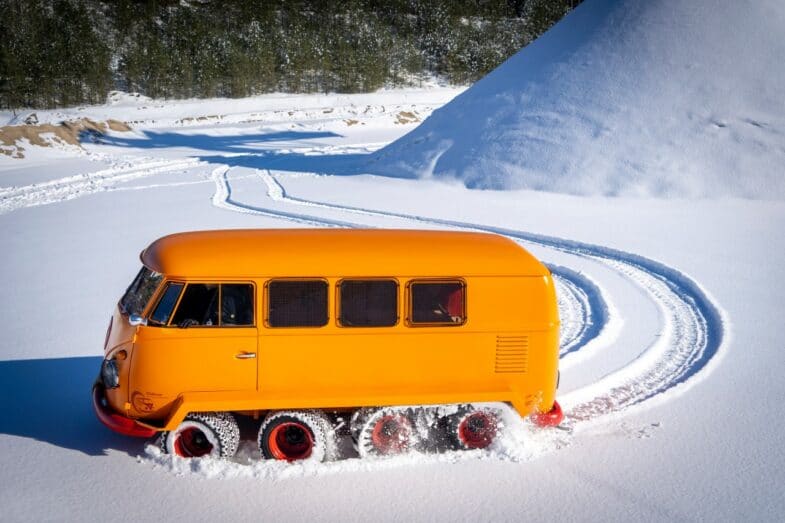 Mechanically, the Volkswagen Combi T1 maintains a 1.2-liter flat-topped 4-cylinder with 34 hp. However, a limited slip differential was installed in the transmission. In terms of running gear that requires almost 4 years of labor for its builder, it consists of two double axles at the front and rear. 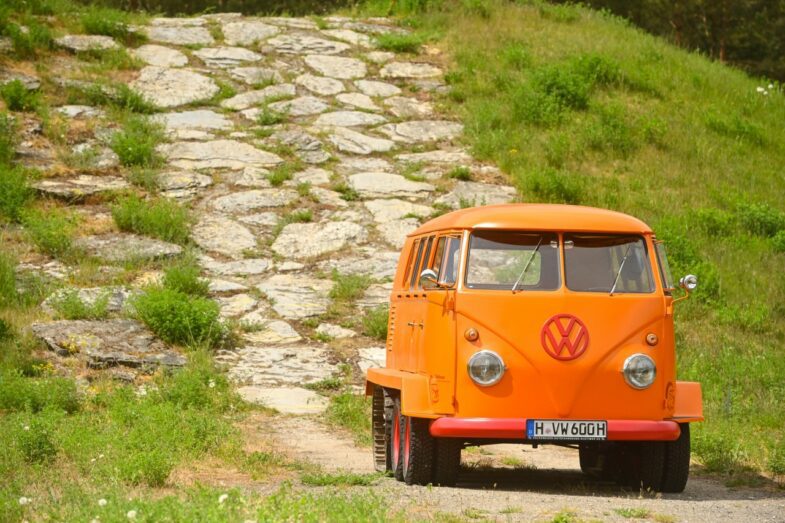 While steering the front wheels (14 inches), the ones in the rear (13 inches) of the Caterpillar Fox are those equipped with tracks. Kurt Kretzner’s goal was to have strong motor skills. That is why the Combi T1 promises adventures very far from the cities but, at a low speed, i.e. only 35 kph max. 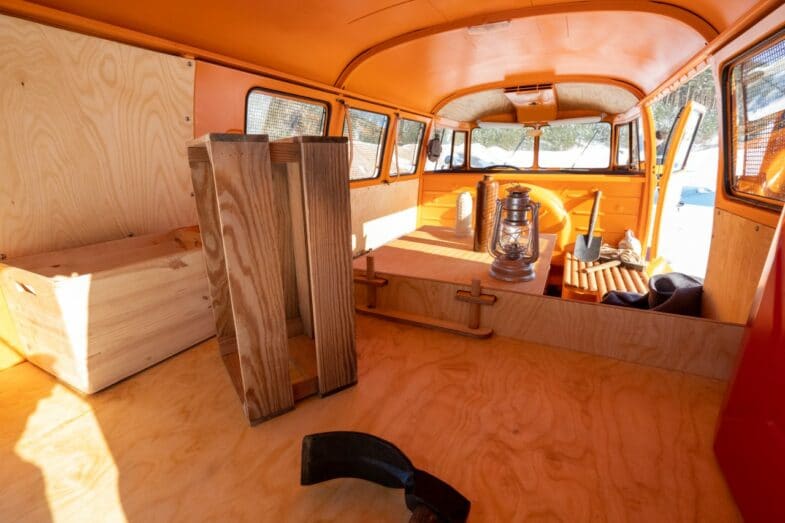 As for the interior decoration, the Volkswagen Nutzfahrzeuge Oldtimer team took the liberty of restoring it in their own way, realizing that it was different from Kurt Kretzner’s “Fox caterpillar”. It is now an entire interior “clothed” with wood, very resistant, and will delight, not without humor, Bob the builder Because a toolbox is installed there. 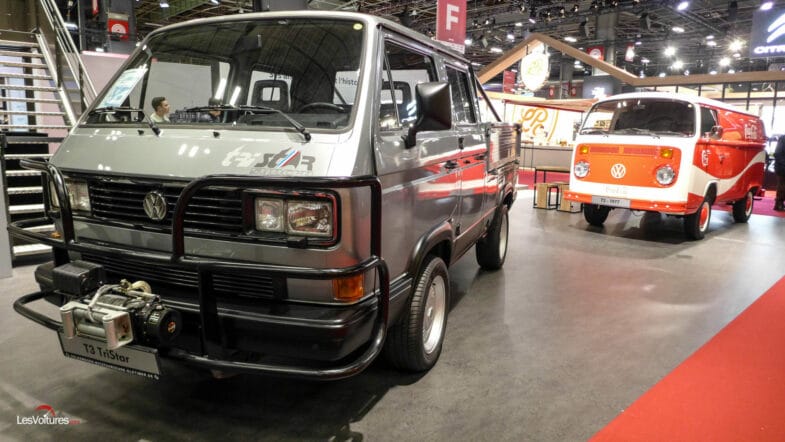 Finally, to the greatest Volkswagen Combi fans who have read, discovered or rediscovered our roundup produced during the Retromobile 2020, by clicking on the image above.