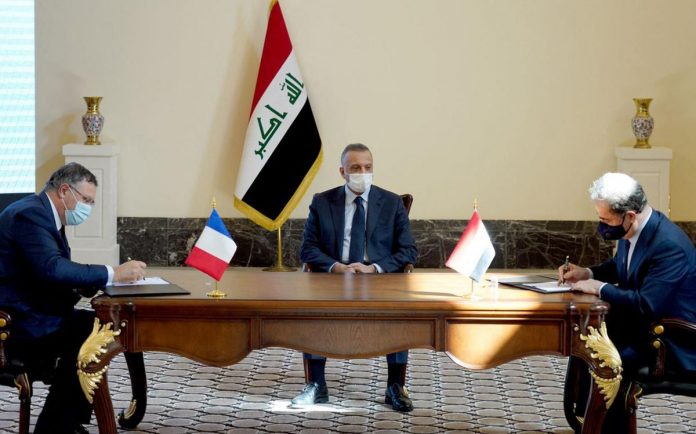 This mega contract aims to generate $27 billion in investments in the country’s oil, gas and solar production, in the face of a severe energy crisis.

The Iraqi government and the French company Total Energy signed on Sunday 5 September in Baghdad a huge contract aimed at generating $ 27 billion of investments in the production of oil, gas and solar energy in the country, in the face of an acute energy crisis. The total value of this agreement is “27 billion dollars” (approximately 23 billion euros), according to Iraqi Oil Minister Ihssan Ismail, after signing the agreement initialed with Total Energy CEO Patrick Boiani.

The two officials explained that the French major plans to invest $10 billion initially in infrastructure, and its proceeds will then allow for a second round of investments worth $17 billion. The group did not provide details or the duration of this agreement, which was made at the end of several months of negotiations that saw Patrick Boiani travel to Iraq on several occasions. “This is the largest investment by a Western company in Iraq,” Ihsan Ismail said.

Patrick Boyani tweeted in January: “Glad to be in Basra where I visited the oil and gas fields.” Reducing gas flaring and increasing its production is a priority for both Iraq and Total. Let’s work together! “

The first of the four approved projects aims to bring sea water from the Gulf to the oil fields in the south. Water, a rare commodity, is needed to extract the oil buried in cellars. The greater the depth of extraction, when hydrocarbons near the surface are already being exploited, the more water will be needed to desalinate.

“Iraq will not pay anything”

The third provides for the construction of a complex that exploits gas from the sector’s fields. In particular, instead of “burning” (burning) the excess gas from these fields, it is about recovering it for the purposes of producing electricity. This will lead, according to the services of the Prime Minister, to “reduce gas imports.”

Finally, the fourth project to install solar panels will be established in Artawi near Basra (south). Ultimately, the capacity of this site should reach 1,000 megawatts, the equivalent of a nuclear reactor, according to a source in the Ministry of Petroleum, who adds: “Iraq will not pay anything.”

The Minister of Petroleum indicated in February that Total had formed a high-level technical team to install a gas plant in Artawi. “The idea is to maximize gas production,” he said.

Iraq has vast reserves of oil and gas. It is the second country in the Organization of Petroleum Exporting Countries (OPEC), and black gold accounts for more than 90% of its income. But he faces a severe power crisis and suffers from constant blackouts, fueling social discontent. The country even experienced a nearly day-long blackout in early July, with temperatures approaching 50 degrees Celsius. Question: The lack of investment and the deteriorating state of the network, which the country’s leaders are trying to explain by the drop in oil prices.

Consequently, Iraq is highly dependent on its Iranian neighbour, which supplies it with a third of its gas and electricity needs. A costly dependency: Baghdad owes Tehran $6 billion for its energy supplies.

As for the former Total, one of the world’s “Big Five”, it has just renamed itself TotalEnergies to symbolize its diversification and transformation into cleaner energies. The group remains highly focused on oil and gas, while demonstrating its intention to allocate 20% of its investment for growth this year to electricity and renewable energies.

He notes that they have been present in Iraq since the 1920s, in the exploration and production of hydrocarbons, with minority stakes today in the Halfaya oil production field (Maysan, South) and in the Sarsang exploration area (Northern Iraqi Kurdistan). It also markets products (lubricants) and services.

Turbos 24h guarantees turbine protection in all types of vehicles