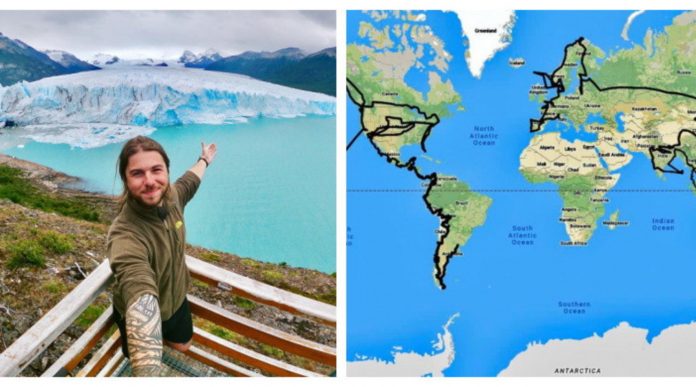 On March 19, 2021, exactly 5 years after you left, you returned to Osio Sotto. But the world tour is not over yet. After a year you spent suffering with Covid away from home, what prompted you to pause the journey?

Since March 20, 2020, I have been stuck in Buenos Aires, Argentina. Initially, the authorities closed all borders and imposed a two-week lockdown. The lockdown – the longest in the world – which then continued for more than seven months. I couldn’t take public transportation, and couldn’t do anything. After that, I “came back” after half a year in quarantine, I said to myself: “I will take a plane and stop everything. However, I will not go to Osio, I want to give the flight another chance.” The hope was to return to Argentina, to Buenos Aires, at the start of 2021, and to continue my world tour. So, I went to Guatemala, where my partner lives, whom I met during a stopover in the country of my trip, and waited until January. With the advent of the new year, noting that the situation had not improved in any way and not seeing the light at the end of the tunnel, I said enough and made the final decision: “I will go home.”

It takes courage to leave everything and leave with just a backpack and a lot of dreams, but also to come back before the goal is met. How was the comeback after all this time?

To tell the truth, the effect was less powerful than I thought. In fact, last year, I had the opportunity to catch flight stops. On the other hand, since March 2020, I have lived a stable and monotonous life. I am no longer a nomad I used to be. It would have been much more difficult and more difficult if you had given up in normal or near-normal conditions, such as the first two weeks of quarantine.

How did you feel facing a year of Covid on the road? Moreover, be aware that your family lives in the Bergamo region, the place most affected by the first wave?

In March-April, I saw services from Zingonia (Bergamo) Hospital in BBC. Pictures of the structure, which is only a few minutes away from my house, have been spread around the world. It was a really difficult situation. I was scared. My family is neither 30-40 years old, so I spent sleepless nights trying to understand a little more. I called home every day to get the news. I was really worried. Then, as the situation started to improve, she calmed down. But it wasn’t easy at all to get out in these conditions for a year, knowing that the people I know are dying day in and day out. In the restaurant I worked at before I left, for example, many of them have disappeared.

Also due to Covid, I was forced to get on a plane. Half of that was not part of your plans …

I had to see the situation. I flew from Buenos Aires to Guatemala (with a stopover in Panama). This was a stop to the world tour. Then, of course, also to go home (I flew from Cancun, where I spent a few days). However, there was one exception before the outbreak of the pandemic. I traveled from Santiago de Chile to Easter Island because there is no other way to get there, other than very expensive and rare cruises. I kind of took a vacation after finding a very affordable offer.

Going back to the same trip, before you were stopped by Covid, how many countries did you visit?

During a project around the world, I was in 48 countries. My first stop was the Camino de Santiago de Compostela. After that, I went to Portugal, in the far west of Europe. From there my climb to Scandinavia began. In the North Cape, after I finished all the European states, I saw the midnight sun. Later, I reached the Baltic republics, then Moscow, and from there I took through Siberia, which took me to Siberia. Then I went to Mongolia, and then to Beijing. Everything is meticulously done by train.

Then I went to Tibet, Nepal, India, Myanmar, Thailand, Laos, Cambodia, Vietnam, Malaysia and Singapore, where I boarded a cargo ship that took me in nine nights to Australia, to Fremantle Port, near Perth. There she rented a scooter and it did Coast to coast With the destination Sydney. However, in Adelaide, she left the scooter and continued public transportation to the Australian city, where she took another cargo ship to California. About three weeks of travel, with a stopover in New Zealand. From the Port of Oakland (California), I went to Alaska to see the Northern Lights. Then Canada and the United States on the road and Latin America. I traveled around Patagonia and Terra del Fuego by bike (about 2,500 kilometers). Finally, I faltered a little to get back and reached Buenos Aires I was stuck.

See also  Taiwan: Pompeo, the island will not suffer the fate of Ukraine

The place you liked the most?

Of all I have to say is Peru, especially Cuzco, in the Andes Mountains of Peru. Historically speaking, it is a city always full of people and amazing landscapes. Not to mention the cultural aspect, the traditions are still alive and tangible. Villages, bustling markets, simple and beautiful life. There is everything.

On the other hand, a tale that still particularly fascinates you?

I have a lot. The generosity of Argentines remained in my heart. When I walked Patagonia And the Tierra del Fuego By bike, seeing the flag of Italy on the car, many people invited me to their house. I spent about 10 days without spending any euros. Some of them had Italian grandparents and then wanted to hear tales about our places. In Patagonia, then, people are different from the rest of Argentina, have a different lifestyle, less active, and more peaceful. Having the chance to be hosted in those amazing – and incredibly expensive – places is unbelievable.

Then, when you are on the shipment in betweenAustralia And the CaliforniaI lived twice on the same day. It’s funny, but it really happened because of the time difference. I left on Sunday and when I arrived, it was still Sunday.

I am still when I was at MongoliaIn the Gobi Desert, I lived in other than Bedouin tents. There, camel droppings are extremely important as they are used as fuel. One evening, I went to pick them up. I saw beauty from afar, gradually increasing, closer, faster. At some point, they might have thought I was a threat, they started running towards me. I was surprised that I ran away while throwing away the fecal sac Screamed. Thankfully, the owners came and stopped them somehow. I don’t know how it would end otherwise. Now it’s funny, but for now I was scared.

A guest in Patagonia, in the Gobi Desert in a tent. As for the rest, how did you handle the residency?

90% of the nights I spend are in a hostel, in dormitories. I paid 3-4 euros. Then I used the tent a lot, which I kept in my bag, especially in Argentina, Chile and Australia. However, in some places, I have had to invent a place to stay a bit, like in the United States, where I often sleep in a rental car. It may sound unbelievable, but I was “staying” in the parking lots at the supermarket.

Has loneliness affected you?

In fact, I was never alone because I have met so many people. Especially in Latin American countries, it is really difficult to be on your own.

Didn’t you give yourself a time limit?

Initially, I wanted to stay away for 1000 days. Then they nearly doubled. When you really encounter the places it’s visiting, it passes quickly. Before I left, in 2016, I had set aside a nice nest egg, about 40,000 euros, so that I wouldn’t be forced to work and at the same time be able to visit very expensive places, like the Faroe Islands. I did it. Even the budget allowed me to have a little more time, but that just wasn’t possible.

Are you missing this life now that you are at home?

Yes and no, because the epidemic knocked me out. Honestly, I am not positive at all. I think that until the end of next year at least, the backpacking trip, to the wild frontier, in short, in freedom, will be a mirage.

Have you written a notebook?

Yes, for a period of time. The initial idea was to write a personal diary every day, different from what I write on social media, as I can express myself in a deeper and more detailed way. However, it lasted for a year. It took me an hour or two a day, so I preferred to put it on standby for more street experience and dating.

what will you do now what do you do now? Upcoming projects?

I am writing a book on the first part of my world tour. Moreover, I would like to visit Italy and personally get to know the people who have followed me over the years. Village after village. Ironically, I don’t know my country very well, only superficially. However, the main project remains to finish my journey, because in all respects I was not around the world. I’m fine, but I’m not done yet. Do not lose sight of my goal. I will continue where I left off, Buenos Aires, and then continue my original itinerary: Brazil, Uruguay, Paraguay, and Africa.

A message from the student to the teacher: “We suffered in...