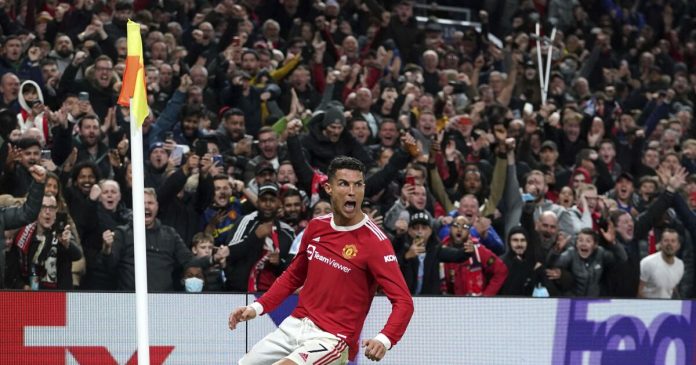 The best scorer in the history of the competition went up and headed in the 81st minute. United reversed their two-goal deficit to defeat Atalanta 3-2 on Wednesday evening in a tense match at Old Trafford.

Barcelona, ​​another team whose presence in the group stage has been complicated, also emerged victorious thanks to a goal from a veteran. Gerard Pique scored in the first half to match the defender’s record for the most goals in the tournament and the Catalans beat Dynamo Kiev 1-0.

Chelsea, the current champion of the championship, crushed Malmo 4-0, but lost strikers Romelu Lokalo and Timo Werner due to injury, while Bayern Munich crushed the local Benfica with the same result.

Cristiano reached 138 goals in the Champions League, consolidating his record, three weeks after scoring in the fifth minute of injury to save the victory over Villarreal in the second date.

His new goal allowed the Red Devils to climb from the penultimate position to first place in Group F.

“It was a perfect header, with that leap at the right time,” said United captain Harry Maguire. “He scored another massive goal in the Champions League.”

Bergamo led 2-0 in the first half with two goals from Mario Pasalic and Mirth Demiral. United went to the end of the first half amid whistles from their fans.

But he showed a different face in the sequel. Marcus Rashford tightened the score at 53 and Maguire tied with 75, before Cristiano found Luke Shaw’s heart to determine the match.

United have two points more than Villarreal and Atalanta. The Spanish team outperforms the Italian team on goal difference, after beating the Swiss Young Boys 4-1, who are in last place with three units.

Pique’s 16th Champions League goal represented three vital points, as Barcelona had just lost 3-0 in their first two games against Bayern Munich and Benfica, and was in danger of not surviving the first round for the first time since 2000-01 edition.

This is Barcelona’s second consecutive win in all competitions after winning only once in their previous six matches.

They also went without a win in the Champions League, their longest winning streak since 1997.

“You can’t forgive too much because we risk our lives,” Barcelona coach Ronald Koeman said. “We forgive up front, thank God we were perfect defensively, but always in play the opponent can have the chance of a tie.”

Pique scored the goal by hitting the center of Jordi Alba first in the 36th minute and equaled the record of defender Roberto Carlos, who scored the most goals so far in the Champions League. He took off from Sergio Ramos and Ivan Helguera, two defenders who scored 15 with Real Madrid.

Bayern did not open the scoring until after 70 minutes, after two invalid goals. Once Leroy Sane opened the scoring, Benfica collapsed.

Sane scored two goals and the German national team led by five points over the Portuguese, at the top of Group E. Barcelona is now one point behind the qualifying places.

In London, Lukaku injured his right ankle when he was fouled by Jorginho’s penalty kick to net Chelsea’s second goal in the 21st minute. Andreas Christensen opened the net at nine.

The Belgium international tried to stay on the field but soon after asked to be substituted.

Werner, Lukaku’s attacking partner, left in the first half with an obvious groin strain.

He was replaced by Kai Havertz at Stamford Bridge and scored the third goal at 48. Jorginho closed the account with a new penalty kick at 57.

The Blues rebounded after falling to Juventus on the second date. The team is second in Group H, three points behind the Italian team, who won 1-0 in their visit to Zenit in Saint Petersburg.

Salzburg beat Wolfsburg 3-1 to top Group G with seven points. In second place, he resigned with three rallies, Seville, to a goalless draw at Lille.

The French team consists of two units, like the German club.

Jose Urquidi made a great start, but left without making up...