Intel has now officially released the new specifications for the ATX 3.0 and ATX12VO 2.0. Perhaps the biggest topic in this context is the 12VHPWR connection, which has been discussed a lot already, but somehow has already found its way with Founders Edition cards. The first power sources to actually provide this connection were introduced and published as part of their modular range. Up to 600 watts can be directed to PCI Express 5.0 expansion cards via the 12VHPWR connector.

But 12VHPWR also adapts to conditions and requirements in a certain way. Depending on whether there is a signal cable or which pins are occupied, only 150, 300 or 450 watts can be delivered through the connector. 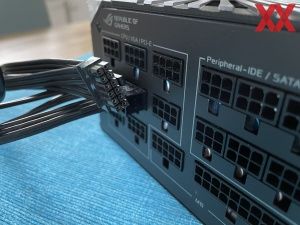 There are also improvements for the ATX12VO 2.0. The main goal here is to continue to make the power supply to complete systems more efficient and to have them consume less, especially at idle. For this purpose, a function called I_PSU% was introduced, which was previously known only in the server and laptop area. We’re currently looking for more information on exactly what’s behind this.

However, SFF systems in particular should benefit from ATX12VO 2.0, as board designs are becoming more flexible according to Intel – which is already inconsistent with the implementation of ATX12VO, since the conversion from 12V to 3.3 and 5V has to be done here on Motherboard. The complexity here goes from the power supply to the motherboard. The ATX12VO is already used with some OEM systems. However, in the DIY sector, this is not expected to prevail in the near future.

On the other hand, ATX 3.0 and 12VHPWR connector will play an increasingly important role in the coming months. In a few days we should expect the GeForce RTX 3090 Ti, the first graphics card model to use it as standard.

We have now received an explanation from Intel about I_PSU%:

The ATX12VO connection enables telemetry via I_PSU% about PSU usage by the system. On the other hand, this makes it possible to warn of overload and shutdown of the power supply unit in existing systems. Power supplies, on the other hand, can run much better in the optimum load range – in coordination with hardware and software, of course.

The popular streaming app is finally available on the Nintendo console