US President Joe Biden gathered ministers and the chiefs of tech giants and big companies at the White House on Wednesday for an emergency meeting on cybersecurity, after a wave of cyber attacks exposed major vulnerabilities.

“The reality is that most of our critical infrastructure is privately owned and operated, and the government cannot meet this challenge alone,” the president said.

“I’ve invited you here today because you have the strength, ability, and responsibility, I believe, to raise the bar for cybersecurity. We have a lot of work to do.”

At the end of the discussions, big tech companies, notably the three world leaders in the cloud (remote computing), announced training programs and investments in cybersecurity, according to a press release.

Microsoft plans to pump $20 billion over five years to “accelerate efforts to integrate security by default” into computer systems, starting with those of national and local US organizations.

Amazon, for its part, has pledged to make its security training designed for its employees available to the general public, while Google will invest $10 billion over five years to “help secure IT supply chains” and enhance the security of its so-called “open” source systems (software). open).

Data theft and ransomware attacks have escalated in recent months, targeting several companies and organizations, including the US pipeline operator, the meatpacking company, the Irish Health Services IT system, and a major Indian airline.

A senior government official told reporters on Tuesday that the incidents “created a sense of urgency”. “We must move towards a system in which security is provided by default,” he said.

The goal of the meeting was to identify vulnerabilities that allow hackers to break into systems, thus making equipment and software more resilient and waterproof.

“According to your estimates and calculations, about half a million cybersecurity jobs have not been filled,” Joe Biden said on Wednesday.

The massive cyber attack that hit the United States at the end of 2020 affected Microsoft’s email servers and led to the hacking of the US company SolarWinds’ Orion software, used to manage and oversee computer networks of large companies or departments.

This episode raised questions about the protection of 16 “key infrastructures,” including energy, defense, industrial production, and food.

– ‘They know where they are and who they are’ –

Some analysts have called for tougher sanctions against Russia and other countries accused of harboring pirates.

“We have mobilized the G7 countries to take action against the countries that harbor these criminals,” the US president said. 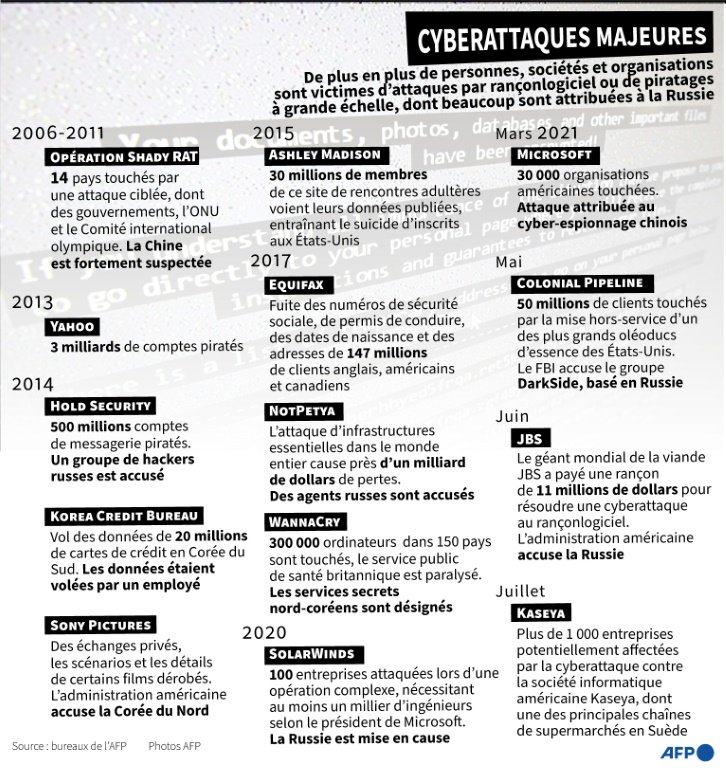 “And I had a summit with Vladimir Putin where I made it clear to him that we expect actions from him as well, because they know where they are and who they are.”

Other experts suggest better regulating cryptocurrencies, which are used by ransom hackers to restore the service they blocked, according to the principle of ransomware.

Presidents Sundar Pichai (Google), Andy Gacy (Amazon), Tim Cook (Apple) and Satya Nadella (Microsoft) attended the White House, along with executives from JPMorgan Chase, Bank of America, and other financial and insurance companies. As heads of major suppliers of water, gas and electricity.

Also participating in the discussions were directors of organizations dedicated to education, led by the secretaries of commerce and homeland security and senior cybersecurity advisers.