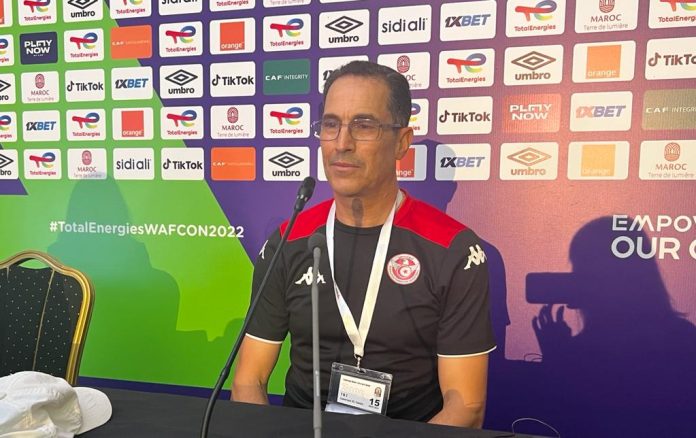 Samir Landulsi understands the defeat against Cameroon well. The Tunisian coach said that his team will show a different face in the quarter-finals, regardless of the opponent.

ATS-Journalist: Tell us what you think of this match?

The match was decisive for both teams. Unfortunately at the beginning of the match we conceded a goal and prevented us from entering the match properly. After we knew how to act, we started at the end of the first period. In the second period we got the Zambia result, I thought about healing my daughters. They played well in the second half, defensively and offensively, I am satisfied and the group cohesion.

ATS-Journalist: We have a feeling your players lost their first game aura? Was it perhaps the fatigue that affected your players tonight, both physically and emotionally?

Samir Landulsi: No, it’s basically the match against Zambia, the first match we played well, we got into the competition really well. The girls played well and scored two goals against Togo in less than 15 minutes. Fortunately, we won that match. The second match against Zambia was good in terms of strength and physique. We couldn’t play our game against Zambia and against them. Today against Cameroon we tried to play another football, and unfortunately we conceded a goal from the start of the match. But little by little we played, the physical aspect is not the rhythm and the experience. My daughters, this is the first time they have played in international competitions like this. But from game to game I think they will advance offensively and defensively.

ATS-Journalist We saw the Tunisian team is unknown in the first half, but in the second half the team became stronger, what explains this? Do you have a match plan for the Cameroon national team?

Samir Landulsi: I had it a while ago, the second minute goal broke us in every way. We stayed for about twenty minutes before returning to the game. At the end of the first half, we started playing well. At the break we talked to the girls and explained to them that we qualified because of Zambia. In the second half we started playing well, we put the ball on the ground and that’s why I’m really satisfied with the team, especially the defensive one.

ATS- Journalist: How do you expect the next quarter-final match?

Samir Landulsi: As I said at the beginning, I learned at the end of the first half that Tunisia had qualified. So I thought our match should be a rehearsal for the next match. I also let the girls rest, who put in a lot of effort in the first two games. Also, don’t forget that I have two yellow cards on the team so I tried to protect my players. So in the second half, we tried to improve our results but we expected the next match. To answer your question, the teams we are likely to face like Cameroon, Botswana or Morocco, have the same level. So surely we didn’t show a good match in the last two games, but Tunisia is ready to fight to the end.

Violent clashes in Tirana before the final Roma-Fyenoord