Persia Digest
Home World CNN journalist in hijab after the Taliban’s arrival: What’s behind this photo 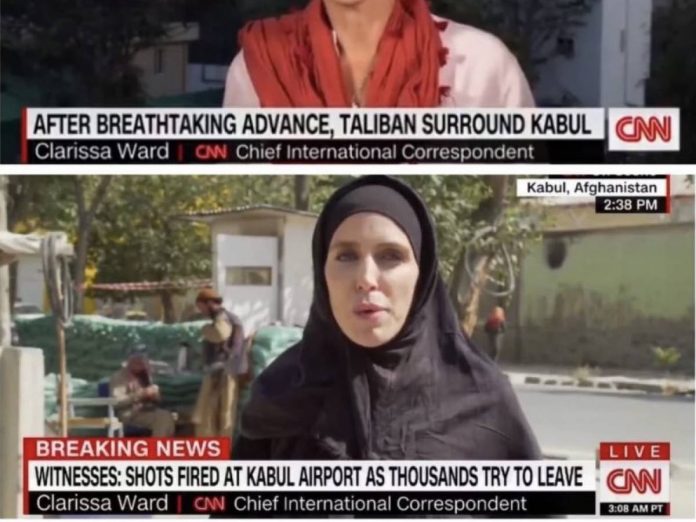 Despite statements, despite reassurances that, frankly, no one believed, in Kabul we are already beginning to perceive the change since the city is in the hands of Taliban. Sometimes pictures speak better than many words and it is enough to look at pictures of “before” and “after” to be aware of what is happening in the world. A meme showing that it has spread rapidly in the past few hours Clarissa Ward, a CNN reporter in Kabul, dressed differently than in the past. The photo went viral around the world and got thousands of shares. But it is the journalist herself, in the evening, who makes some important clarifications about that meme.

The collage that has been bouncing around on social media for the past few hours compares a photo of Clarissa Ward a few days ago to a shot taken in the past few hours. Immediately striking the difference between the two snapshots and their connections. In fact, the former reporter wears western clothes with her head uncovered, which allows her to show off her blonde hair, although it is tied up. But in the latest photo, Clarissa Ward is wearing one hijab black model Islamic headscarf Covering the forehead, ears, back, neck, hair and a dress called aScience. Difference attributed by many to the Taliban settlement in Kabul, but it was the same journalist who explained more accurately, emphasizing some details.

“This meme is inaccurate. The photo above is inside a private compound. The one below is on the streets of Taliban-controlled Kabul. Previously I always wore a scarf On a street in Kabul, albeit not completely covered with his hairabaya. So there is a difference, but not that clear”, the journalist was keen to specify, explaining that even before the emergence of the Taliban it was desirable to cover the head.

This meme is inaccurate. The top photo is inside a private compound. The bottom is located on the streets of Taliban-controlled Kabul. I always wore a headscarf on the street in Kabul previously, even though the hair and abaya were not completely covered. So there is a difference but not that clear. pic.twitter.com/BmIRFFSdSE

A similar speech was also given to the journalist Charlotte BellisKabul correspondent for Al Jazeera International. Also in his case, two photographs were shown at two different moments, before and after the Taliban’s arrival in the Afghan capital, highlighting the presence of the hijab, which was not present in the old photograph. But as one of the users indicated, on other previous occasions, the reporter performed the services of the veil on her head, but, as is evident, the new course prompted her to wear it in any television service broadcast for her.

Charlotte Bellis from the island hours before the Taliban took control of Kabul and after! pic.twitter.com/HqrynBNn5a

Although the situation in Kabul is slightly distorted in the social media narrative, life in Kabul has undoubtedly changed for women, as Clarissa Ward herself noted in one of her CNN calls:I’ve seen far fewer women than I usually see Walks In the streets of Kabul“.

He booked surgery at the hospital, but found out it was...