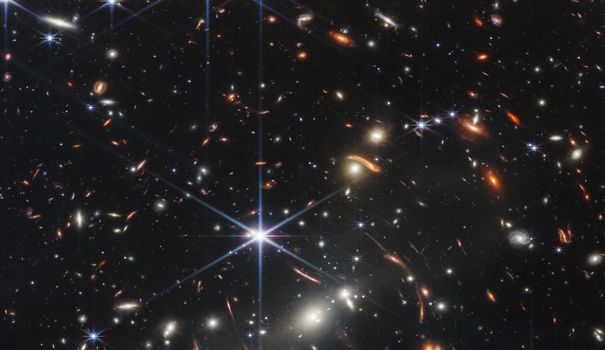 The drumbeat of media rarely makes much noise for their work in scientific memory. Do you realize the night of July 11-12, Joe Biden, Himself, live from the White House, wanted to comment on the first image from the James Webb Space Telescope (JWST) to call it “historic.” The beginning of the conquest of space appears to have been when President Kennedy launched the Apollo missions to the moon.

However, the image revealed tonight is not the most artistic that JWST can achieve. It’s just been called “the deepest taken of our universe” in the words of Bill Nelson, head of the US space agency (NASA). “Personally, I find it particularly beautiful,” said David Elbaz, scientific director of CEA’s Division of Astrophysics at Saclay. Not because of what it allows us to see, poor humans, because the main feature of JWST is its work in infrared (a wavelength invisible to the human eye), but for what it describes with unparalleled accuracy to experienced astrophysicists.

“It’s a group of a thousand galaxies called SMAC 0723, which is particularly interesting for its large central galaxy and faint luminous halo which can correspond to starlight that has been ejected into intergalactic space. But this image is especially precious to us as it allows us to cast Look more at,” David Elbaz continues. In fact, the famous cluster is located 4.6 billion light-years away but works like a magnifying glass – we’re talking about an effect called a gravitational lensing – making it possible to detect, behind it, cosmic objects much farther away since they were identified more than 13 billion years away. Photochromic. “Ultimately, we don’t know much about what happened between 13.8 billion (the Big Bang) and 13.3 billion light-years away, and this is really the main task of James Webb for us to shed light on the beginnings of the universe,” adds David El-Baz. In the deep-field image of the universe, distant galaxies appear as subtle luminous arcs just as we also see light from stars torn from their own galaxy. “It will take several months to examine this image in detail, but the first results could come in September,” the CEA astrophysicist hopes.

Show the full capabilities of JWST

Everything is going really fast in the end, because the space telescope with a giant mirror with a diameter of 6.5 meters, which was launched in December 2021 by an Ariane 5 rocket stationed at the Lagrange point L2 located 1.5 million kilometers from Earth, now qualifies as “appropriate” for work “. After six months of careful deployment and a host of tests, each of the four onboard instruments is completely satisfactory.

So scientific work began in June, and the first photo revealed in the presence of Joe Biden was part of that first harvest. On Tuesday afternoon, NASA will reveal four more images. “Some of them will be stunningly beautiful, but above all they will highlight all the possibilities of JWST,” promises Pierre-Olivier Legge of CEA, Scientific Director of MIRI (Instrument Infrared), which is the only one capable of operating in the mid-infrared. One of the most amazing things will come from Stephan’s Quintet, a group of galaxies found in the constellation Pegasus — “one of the most chaotic places in the universe,” according to Elbaz. But the most beautiful should come from the Carina Nebula, which is 7,600 light-years from Earth and considered the largest stellar nursery in our galaxy. “Because of the quality, we will be able to zoom in and reveal extraordinary details,” David Elbaz enthuses. Another nebula presented by NASA today is the Southern Ring Nebula (2000 light-years away): “It is losing its envelope of expanding gas, explains the researcher. It passes through grains of dust and particles and we hope to finally know its composition.”

See also  Starting tomorrow, all photos will be counted

In search of life forms elsewhere in the universe

In this chemical work, JWST will also do exoplanets – those planets that orbit a star other than our sun. Nearly 5,000 have been discovered since the first in 1995. “We’ve gone from the era of discovery to the era of characterization,” David Elbaz confirms. One of the images shown today is of the exoplanet WASP-96b, a gas giant. “Here again, what needs to be clarified is the telescope’s ability to find biosignatures (methane, oxygen, ammonia, etc.) to analyze the chemical composition of the atmosphere,” explains Pierre-Olivier Laguge. So finding traces of water there would be good news.

For tracking analysis and decoding wherever you are

But for CEA’s exoplanet specialist, far from today’s demo, the target for JWST is called Trappist-1B, an Earth-sized rock located 40 light-years away. Discover irrefutable proofs of housing. The scientific work of the James Webb Telescope has just begun and promises many revolutions in the history of our universe.