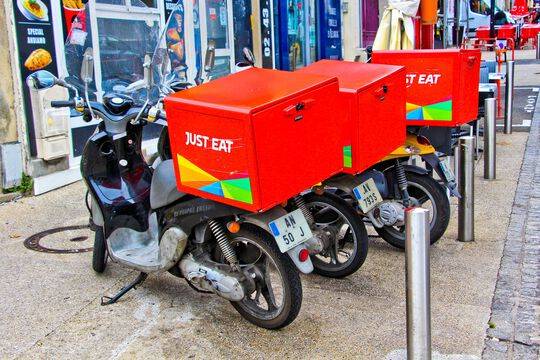 Will your Christmas Eve pizza be delivered? Meal delivery company Just Eat’s CGT called a strike Friday night for the “delivery man’s eve”, in Paris and Lyon in particular, to demand better wages and working conditions.

Ludovic Rio, secretary of the CGT for bicycle delivery workers in Lyon, decried “too high turnover, low wages compensated by the minimum wage on 1 October” and inadequate support for equipment by the company.

He stresses that the delivery people “should be involved in renting or using their personal bicycle, while the company must provide their own working tool”.

Bring delivery people for delivery all over Paris

Another stress point: the company recently ended a “zoning” system for five hundred Parisian deliverymen. So they can now be asked to deliver to customers at the other end of the capital.

“The work became more physical, with more delays and lower quality of services,” recalls Ludovic Rio. And outside of big cities, he adds, delivery people don’t always find a place to rest and warm up.

Worshipers mobilized on Friday won’t hold back orders all evening, but they hope to put a “pressure blow” on this symbolic date of December 31.

In response to a question by AFP, the management of Just Eat confirmed its “sincere desire to offer a more responsible approach to the delivery of meals”, while offering “prospects for development” to French carriers.

At the beginning of 2021, the Anglo-Dutch group announced the hiring of 4,500 permanent contract delivery staff throughout the year in France, an unprecedented decision in a sector where the majority of platforms (Deliveroo and Uber Eats) use freelance workers.

According to a Just Eat spokesperson, this status gives employees “all the benefits and social protections associated with it” and thus provides them with “a decent hourly wage and not by race, a salary fixed to the minimum hourly wage and an on-demand bonus.”

A year later, “there are still only a thousand of these employees,” regrets Ludovic Rio, however, which raises a “marketing argument.”

FO is preparing for another movement

Supporter of wage earning but skeptical of the “effects of advertising,” CGT regrets that this change has not been accompanied by a real improvement in working conditions.

The FO union did not plan to mobilize on Friday night, even if most of its demands converge with those of the CGT.

“We already have a movement to prepare for the next few days, for all delivery workers who are experiencing unfair dismissal, our working conditions and against instances of harassment,” said Jeremy Grassa, a representative of the FO union.

Russia is paying off its debt in dollars, raising fears of...