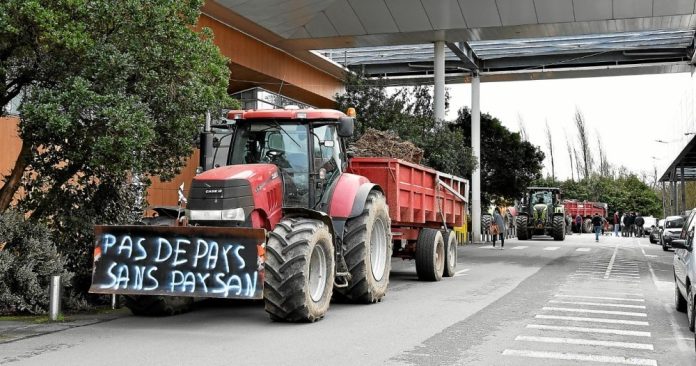 The procession of fifteen tractors met at the end of the morning at the Aldi supermarket in Kimberley. Then thirty or so farmers entered the store with the aim of checking the origins of the fresh produce sold. Grain growers, growers and vegetable producers were all present to point out that the Egalim Act “for the balancing of trade relations in the sector of agriculture, food and food that is healthy, sustainable and accessible to all” has not yet been respected.

If they were mostly affiliated with guilds, the cultivators present did not meet the invitation of their union. Their determination has remained the same for three weeks already: to pressure the ongoing trade negotiations at the national level between representatives of industrialists, processors, major retailers and agricultural unions.

Among the shelves empty of customers, where managers preferred to close the store, farmers walked around and scanned QR codes with their phones. “There are certain products in which you have to have a smartphone to know where it came from. That alone is not normal,” sighs Antoine, who grows vegetables in Trevaux. On the checks, they filled two carts.

There is cheese, ready-made meals. Pork trays flocked with the flag in the colors of France and attracted attention with the mention of “Made in France”. “But if you look closely at the label, it says EU. So it may not have been produced in France,” accuses a professional. “I’m not against finding products that come from elsewhere. We have the right to have pork that comes from Italy. We also do exports. It’s a shame, in Brittany, to find broccoli or milk that comes from somewhere else,” that’s what Dairy farmer said.

After an hour of clearing the shop and its parking lot, some tractors emptied the contents of their trailer in order to prevent an exit from the building. Farm machinery took the road to cross the Kimberley towards Locklear, where the same operation was carried out at the beginning of the afternoon. At 5:45 p.m., after a barbecue and dumping of tires and dirt in Place Leclerc, protesters decided to head toward the Lidl of Quimperlé.