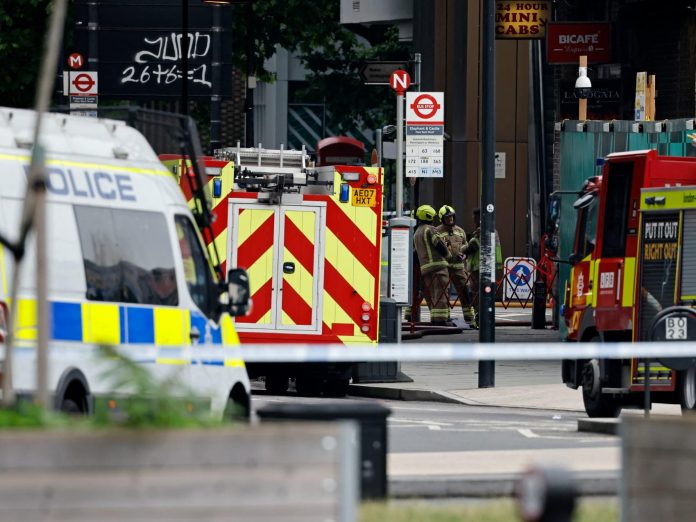 A major fire has broken out at Elephant and Castle Station in South London. At the moment there is one wounded person. The BBC reported that paramedics in ambulances had taken over the man in charge.

More than a hundred firefighters and 15 fire engines have pledged to put out the fire, according to a tweet from the firefighters, calling on residents of the area to close doors and windows to protect themselves from the thick smoke. The Guardian wrote that the police did not believe the incident was linked to terrorism.

The arches at the entrance to the station caught fire. The first alert was sounded at about 13.43 local time. A video posted by the firefighters shows thick smoke rising from some sort of storage or garage, followed by an explosion and a fireball. Firefighters confirmed that three commercial units under the arches, four cars and a telephone booth, had completely caught fire.

A witness told the BBC that at least one building had been evacuated, and reported that the entire building where the restaurant where he worked was located had been vacated. “We saw smoke rising, a plume of smoke enveloped the apartment buildings while we heard slashing barrels,” the 30-year-old added, referring to the explosions felt by several witnesses.

A woman living nearby told The Guardian she heard an explosion and people screaming as smoke billowed into her windows.

The area under the station, now enveloped in black smoke, is known as “Little Colombia” because there are small shops and food vendors from the South American country. The station was closed and alternative routes were established.

See also  Vatican: The budget of the Holy See rises to 66.3 million - Politics

Elephant and Castle station is part of Thameslink, a commuter rail line serving London Gatwick and London Luton airports. It runs through London and is roughly an Underground line, with stations similar to tube stations and the train frequents every 4 minutes during rush hour.

The head of Danish military intelligence is in big trouble