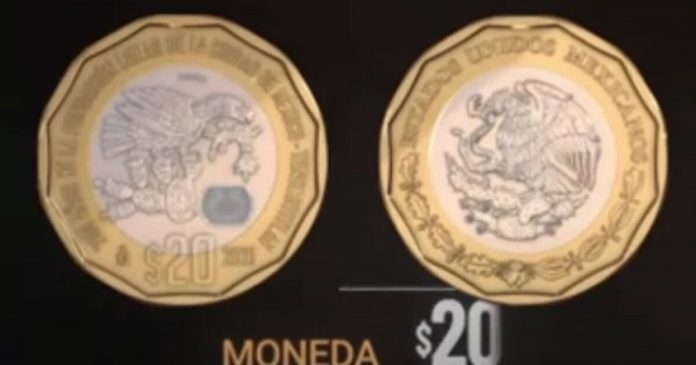 Features of the new 20 pesos coins

The twenty pesos coins have a two-sided shape and have a latent image and small text as security elements. The commemorative coin for “500 Years of Historical Memory of Mexico-Tenochtitlan” offers an innovative design, as it is the first coin to show an image in the form of a reflection on its back, offering two views of the observer depending on the direction of the coin. Silver coins are circular in shape and contain one ounce of silver.

With these coins whose characteristics have been determined by the Congress of the Confederation, in accordance with the decree published in the Official Gazette of the Confederation on June 8, 2021, the Bank of Mexico joins the 2021 Commemoration Program, which recognizes the pre-Hispanic greatness, the cultural richness of the indigenous communities and Mexico as an independent nation, The Bank of Mexico informed in a statement.

The obverse of the six coins bears the national shield surrounded by the legend “ESTADOS UNIDOS MEXICANOS,” while the obverse presents different characteristics.

Those that are traded

For the 20 pesos bimetallic coins, the reverse of the coin denotes “700 years of the lunar foundation of Mexico City-Tenochtitlan” In the center is the eagle from “Teocalli de la Guerra Sagrada” and the small text “TEOCALLI” on it. On the right is the avatar of the moon as a latent image. On the top edge, the legend “700 YEARS LUNAR FOUNDATION OF MEXICO CITY-TENOCHTITLAN”. The denomination “20 dollars” is to the right of this year “2021” and to the left is the Mexican mint denomination “m °”.

Reverse currency that refers to “500 Years of Historic Anniversary of Mexico-Tenochtitlan” It shows the Metropolitan Cathedral, the Templo Mayor and the “$20” denomination forming a reflection. Templo Mayor as a latent image and partial text “Cultural Fusion”. “2021” and “1521” cents are to the right of the “20 dollar” denomination, the legend “500 years of historical memory of Mexico – Tenochtitlan” and the Mexican mint “M°” on the border.