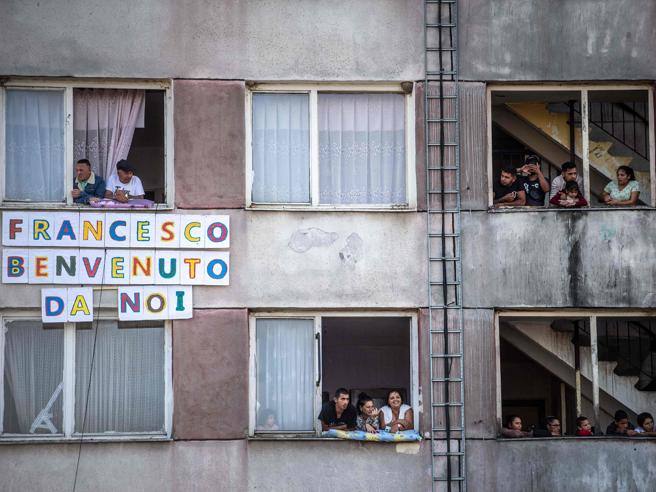 Francis visited what is now the largest Roma settlement in Europe, the Lunk IX district of Kosice in eastern Slovakia. To greet them with songs, dances, and banners: but they did not succeed in hiding the general poverty

KOŠICE – Separating people doesn’t solve anything. When sooner or later lockdown flares up, rage erupts. The way to peaceful coexistence is integration. Francis welcomed a singing and dancing afternoon with a visit to the largest Roma settlement in Europe, the Lunk IX district of Kosice, in eastern Slovakia. They wrote songs and dances on the front of one of the towers in colorful letters Francesco hello among us, But the flag is almost lost in public ruin. Street paintings, facades dripping with a now undefined color like hanging clothes or the smell still stagnant among the crumbling and crumbling blocks of apartments, As for the Pope’s arrival, an attempt was made to clean up a bit but the piles of rubbish were felt even from a distance.. Abandoned buildings are often without gas, running water, and heating, and black walls testify to fires that were lit in winter on what was left of the grounds. Around some houses in the adjacent neighborhood, barbed wire is visible to protect the windows. Here and there, you can still see the remains of a wall they erected years ago as a barrier.

At the end of the 1970s, the communist regime made it a social housing area For the army, police and public servants. They’ve all been gone for decades. There are still Gypsies who lived in huts in the city or were sheltered in the woods or on the surrounding hills and were forced to move to what is now the largest Gypsy settlement in Europe, Lunk IX, a neighborhood that in the first decade of the century they numbered eight thousand people They live, and now, at intervals, their number is estimated at 4,300 because many Roma families, too, escaped as quickly as possible. Now the space in front of the high-rise buildings is full of people, Families peek out from the windows, the children are handed flags, and there are a lot of girls and boys. Dear brothers and sisters, I have often been subjected to preconceptions and harsh judgments, discriminatory stereotypes, and defamatory words and gestures. With us we all became poorer, poorer in humanity. What we need to restore dignity, Francis says, is to move from prejudice to dialogue, from closedness to integration. After all The history of the Roman-speaking people in these lands is frightening. Most of the half a million people came from Eastern Europe, including Sinti and Roma, who were exterminated by the Einsatzgruppen or deported by the Nazis to the Zigeunerfamilienlager at Auschwitz-Birkenau: Pragmus, Destruction, Holocaust of the Roman Population. Under communism, there were still ghettos and forced sterilizations of thousands of women. Yet they resistedMore than four hundred thousand Roma live in Slovakia, which is 8 percent of the population. However, integration difficulties remain. Since 2012, the Salesian Pastoral Center run by Father Peter Bechenyi has been working to cope with the usual problems, teachers who run away, children who do not go to school, families who have dropped out of schools that Roma children go to, and they are afraid and loath to celebrate relations with the rest of the population.

I thank those who do this work of integration, who, in addition to making a few efforts, sometimes also meet with incomprehension and ingratitude.Perhaps even in church, says Francis. No one will keep you or anyone else away from the church! The Pope’s sobering speech: I invite you all to transcend fears, beyond the wounds of the past, with confidence, step by step: in honest work, in the dignity of earning daily bread, in nurturing mutual trust. Pope says: Don’t judge, Christ tells us. How often, on the other hand, do we not only speak without elements or by hearsay, but consider ourselves right when we are strict judges of others. Tolerant of ourselves, inflexible with others. How often judgments are biased in reality, how often we shoot adjectives! He distorted with words the beauty of God’s children, our brothers. You can’t reduce other’s reality to your pre-packaged forms, and you can’t map people. After all, ghettos solve nothing, Bergoglio insists: Integration is an organic, slow and dynamic process that begins with mutual knowledge and continues patiently and looks to the future. And To whom does the future belong? For children. They guide us: their big dreams cannot break our barriers. They want to grow up with others, without obstacles and foreclosures. They deserve an integrated and free life. It is they who stimulate far-sighted choices, which do not seek immediate approval, but look to everyone’s future. The Pope also addresses Roma families: Courageous choices must be made for children: for their dignity, for their education, so that they may grow up rooted in their origins but at the same time without seeing any unlikely possibility.

A customer is asked to wear a mask, and he is shot in the head: He died at the age of twenty