Persia Digest
Home sport Qatari official suspended: “Attacks on the World Cup are possible because of... 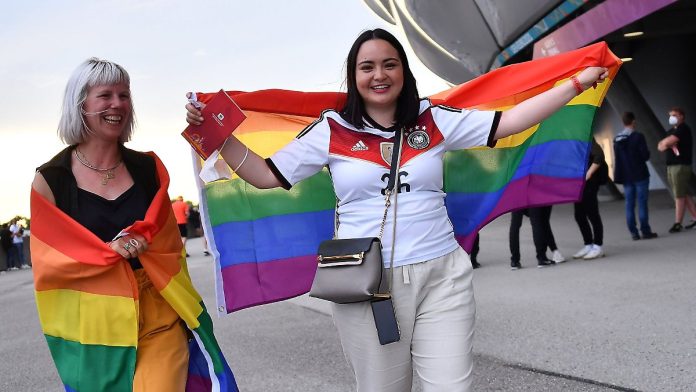 Qatari official for the ban
Attacks on the World Cup are possible because of the rainbow flags.

At the European Championships last year, the rainbow flag was a faithful companion of many fans. A Qatari security officer is now warning against displaying the symbol of sexual and gender diversity at the World Cup – because he believes attacks on the fans involved are likely.

A Qatari security officer has spoken out against flying rainbow flags at the World Cup in Qatar – because he fears possible attacks. Major General Abdul-Fattah Abdullah Al-Ansari told the Associated Press that a fan “showed the rainbow flag and I took it from him, it’s not because I really want to take it to hurt him, it’s to protect him.” “Because if it wasn’t me, someone might attack him. I can’t guarantee everyone’s behavior. And I’d say to him, ‘Please, there’s no reason to show the flag here.'”

Al-Ansari is, among other things, the head of the National Counter-Terrorism Committee in the Qatari Ministry of Interior. The rainbow flag is a universal symbol of acceptance of sexual and gender diversity.

There is no place for LGBT+ in Qatar

Qatar, which is hosting the World Cup, is not criticized by international organizations only because of the human rights situation and the conditions of expatriate workers. Amnesty International recently ruled that women and lesbian, gay, bisexual, transgender and intersex (LGBTI+) women “continue to be discriminated against in law and in everyday life”. Homosexuality is illegal in Qatar.

FIFA President Gianni Infantino recently said: “Everyone will see that everyone is welcome here in Qatar, even if we are talking about LGBT+.” In the past, FIFA has confirmed that rainbow flags are allowed on the stadium. The World Cup organizers in Qatar said they would respect the guidelines of the global governing body in this regard.

Al-Ansari said he does not advise LGBTI+ fans to stay away from Qatar. “Book a room together, sleep together, it’s none of our business,” he said. Anyone who wants to express their views on the status of the LGBTI should do so in a community ‘where it is accepted’.