Persia Digest
Home science Rocket Lab: The stage of the rocket captured by the helicopter after... 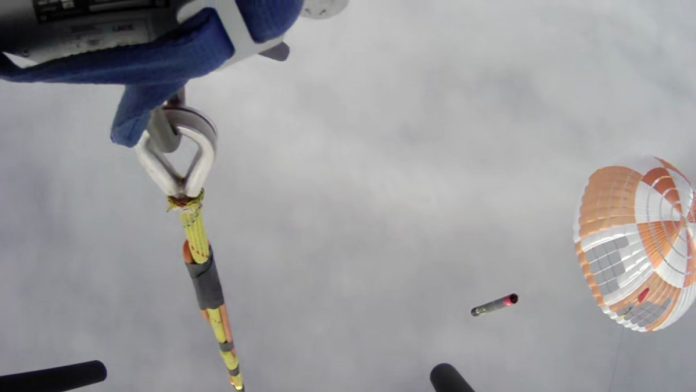 The American space company Rocket Lab managed, for the first time, to catch a rocket stage in the air after a successful launch by helicopter. However, since the pilot then noted “different load characteristics” compared to the tests, the stage was launched and successfully smoothed out. It has since been recovered and is being moved again.

The plan is to fix it and let it fly again. In the company’s 26th launch attempt, 34 satellites were successfully launched from its own site in New Zealand. The rocket stage was captured at an altitude of about 2000 meters with a hook attached to a long rope on the helicopter.

After SpaceX, Rocket Lab is the second largest US aerospace company. The missile, called Electron, has proven its performance in dozens of launches and is set to become the first reusable missile for small payloads. After launch, the first stage gently slides on a parachute towards the surface of the Earth, after which a converted Sikorsky S-92 transport helicopter is supposed to pick it up in the air with a hook.

This has now worked largely as planned, Rocket Lab confirms. video Shows maneuvering from the perspective of the helicopter pilot. Although the missile was not eventually brought from the helicopter to the transport ship, the company is talking about a successful return mission. Company founder Peter Beck said he was very proud. It will now check if changes to the action are necessary.

A total of 34 satellites from various manufacturers have now been launched on the “There and Back Again” mission from the Rocket Lab launch site on the Mahia Peninsula on the east coast of New Zealand’s North Island. In total, Rocket Lab launched 146 satellites into orbit.

A year ago, a launch attempt by the US space company failed, at the time the second failure in a year. In the meantime, the company is back on the road to success Successful start now It was the sixth in a row. Rocket Lab plans to launch another rocket later this month.