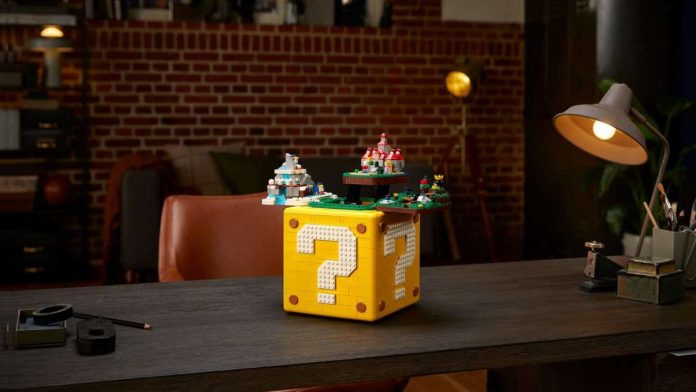 Lego and Nintendo have announced a new partnership for the Super Mario 64 Block set to celebrate the game’s 25th anniversary. The set comes with a large question mark block that opens to reveal iconic settings from the Nintendo 64 title from 1996.

Locations include: Peach’s Castle, Bob-omb Battlefield, Cool, Cool Mountain, and Lethal Lava Trouble. The set will launch on October 1 through Lego retail stores and the Lego website, and will reach “other leading retailers” globally starting in 2022. The set costs $170.

The set comes with minifigures of the popular Mario universe characters, including Mario, Princess Peach and Luigi. Mario and Luigi characters can play music and sounds from the game. Finding the Power Stars will reveal the “secret reactions of the characters.”

“It’s hard to imagine the Super Mario Universe without the iconic levels of the classic game full of discoveries and secrets. With this amazing set, we build on the exciting gameplay experience of Lego Super Mario, both bringing a bit of nostalgia to those who’ve played the Super Mario 64 video game, but also to offer this Great levels for a whole new audience of Super Mario fans.”

Here is a complete summary of what is included in the Super Mario 64 Block set, as written by Lego.

Lego and Nintendo are already working together on several products, with the Lego Super Mario universe line launching in 2020. The Lego Adventures with Luigi course was released earlier this year.

Samsung finally launched OLED TVs under its own brand