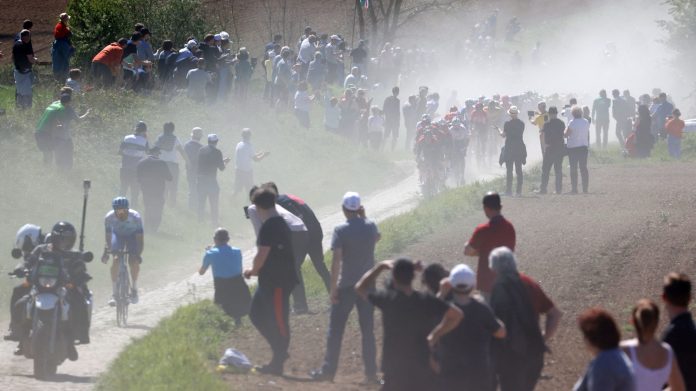 The fall restarted racing again as the second peloton locked in the first on Sunday.

The first major fall of the year for Paris-Roubaix. While the glitches for many have been linked to the fall for Mads Pedersen, in particular, Filippo Gana’s hole, this time it was the general fall in the second part of the first peloton that turned the start of Paris on its head – Roubaix, April 17th. When the men in command entered sector 27 of Saint-Python, a fall including ten contestants completely slowed the group and changed the face of racing.

On the ground, we find – once again – the unfortunate Anthony Torges, who suffered his third fall there in three straight races after the Tour of Flanders and the Amstel Gold. The French rider had to give up after this event, as he was injured in the shoulder. Magnus Sheffield, the last winner of the Flèche Brabançonne, was also among those runners on the ground. In the back, the men blocked the second seconds, which included Matthew van der Poel and Wout van Aert, to the ground and precious seconds were lost when a crossover was imminent. Up front, Niki left Terpstra alone after falling into Saint-Python’s sector.

Get the basics of our news with our newsletter

Franceinfo channel selects daily content from European audiovisual media, members of Eurovision. These contents are published in English or French.

“I can’t do without him”