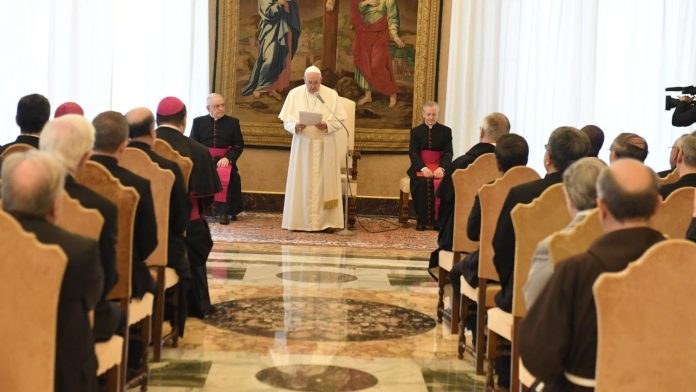 Professor of Systematic Theology at the Sofia University Institute in Lupiano, succeeding Father Serge Thomas Bonino who held this position for three terms. Twelve new members were appointed, including three women and one layperson. Plenary meeting scheduled for 2022

Monsignor Piero Coda, theologian and philosopher, and currently Professor of Systematic Theology at the Sofia University Institute in Lupiano, is the new Secretary General of the International Theological Commission. The papal appointment was announced today by the Vatican Press Office. Doctor of Philosophy at the University of Turin and in Theology in the Lateran, where he also taught from 1985 to 2008, succeeding Coda as General Secretary to the Dominican Father Serge Thomas Bonino, who held this position for three terms. In addition to Bonino, the term of Monsignor Riccardo Bolati, Deputy Secretary of the Commission to date, ends. The latter was succeeded by Monsignor Maurizio Barba, official of the Congregation for the Doctrine of the Faith.

A commitment to interfaith dialogue

Monsignor Coda currently coordinates the Department of Theology, Philosophy and Human Sciences at the Institut Sophia in Val d’Arno, founded by Chiara Lubic. He was Dean of the same institute from 2008 to 2020. A former member of the Theological Committee, as well as of the Italian Theological Association (also President from 2003 to 2011) and the Pontifical Academy of Theology, he is involved in many research groups in different countries, such as one in Trinity Anthropology Selam in Latin America. With rich experience in dialogue with Shiite Islam, he is an advisor to the Pontifical Council for the Promotion of Christian Unity and a member of the Joint International Committee for Theological Dialogue between the Catholic and Orthodox Churches. He is the author of numerous theological publications, most of which have been translated into various languages, and is well known for his international commitment to interdisciplinary and interreligious dialogue. He also collaborates with many scientific and cultural journals.

In addition to the General Secretary, Pope Francis has always appointed twelve new members to the same theological commission, all theologians and experts from different schools and countries (mostly from Europe), “life cases and religious gifts”. Women’s attendance was also boosted, “as a sign of a growing commitment on the part of women in the field of theological sciences”, with the appointment of three theologians. Among the new members is a secular theologian.

The appointments are the result of the consultation that took place in the first months of 2020 between the episcopal conferences of the world and the councils of the eastern dioceses. On the responses received, Cardinal Luis Ladaria, head of the Doctrine of the Faith, offered the Pope a preference for the candidates; Then the Supreme Pontiff proceeded to the appointments.

At the same time, Pope Francis renewed the mandates of the other members for a period of five years from 2021-2026, who expressed their gratitude for the “competent and enthusiastic theological service”. The authority explained in a statement that the ninth five-year period of activity (2014-2019) – which began with the papal appointment of its members on July 26, 2014 – ended with the celebration of the fiftieth anniversary of the founding of the authority. to will. It was Paul VI, on April 11, 1969, who wanted to create this commission with the aim of assisting the Holy See, and in particular the Congregation for the Doctrine of the Faith, in examining the most important doctrinal and substantive questions. In recent decades, the commission has published 30 documents; Three of them have been printed in the past five years: “The Council in the Life and Mission of the Church” (2018); “Religious freedom for the good of all” (2019); Reciprocity between faith and secrets in the management of the secrets (2020).

Juan Carlos leaves Spain and goes into exile in the Emirates: an embarrassment at court- Corriere.it

Merkel admits we haven’t done enough for the climate – last...