Persia Digest
Home Tech Thomas Pesquet has returned to the International Space Station, after a spacewalk... 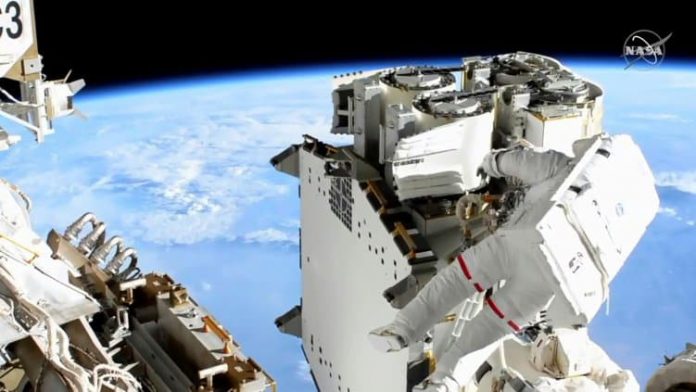 The French astronaut must make a new trip on June 25 to finish installing the new solar panels.

This was Thomas Bisquet’s fourth space flight, and the second in this mission, that he conducted with fellow American Shane Kimbrough.

At 11:42 GMT, the two men, who arrived aboard the station at the end of April, activated the internal battery of their suits, and then opened the hatch of the International Space Station’s decompression chamber. Thomas Bisquet, out into the void first, was followed by his teammate.

During 6:28 am, the astronauts finished positioning, installing, wiring, and deploying the first new generation solar panels, 19 meters long, and began installing a second. These solar panels, called iROSA, are believed to enhance the power generation capabilities of the International Space Station and were delivered by a SpaceX cargo ship.

The Mechanics began installing the first solar panel on Wednesday. But the expedition was troubled by several setbacks, including concerns about Shane Kimbrough’s suit.

“We will return to the void of space to finish the work of the first director (deploying the first solar panel) and install the second,” Thomas Pesquet had detailed on social networks Sunday morning, beaming at the prospect of a ‘wonderful day.

A new spacewalk scheduled for this week

NASA is planning a new spacewalk on June 25 so that the duo can complete the installation of a second solar panel.

See also  The Soyuz spacecraft landed, and a Russian and an American cosmonaut returned to Earth.

Thomas Pesquet now counts 26 hours and 15 minutes spent in spacewalks. This is the fourth time that the two astronauts have floated together in zero gravity, clinging to the space station that orbits 400 kilometers above Earth. They already carried out two side-by-side spacewalks in 2017, and one on Wednesday. This is the 240th flight in the history of the International Space Station.

Xiaomi announces its association with Leica to improve its smartphone cameras...