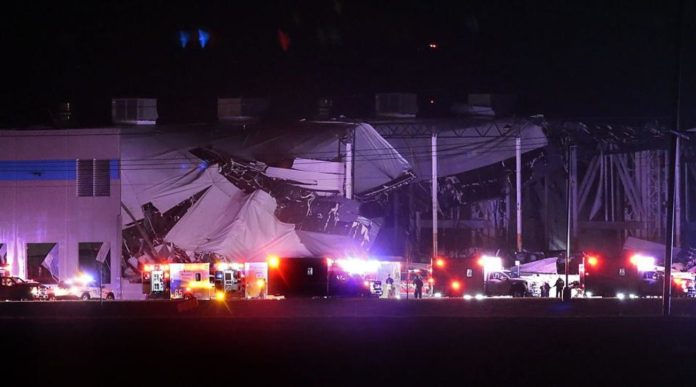 On Earth for more than 200 miles – The governor of Kentucky explained that the tornado touched the ground for 227 miles (about 365 kilometers), including more than 200 in his state. Entire areas were flattened. Homes, factories, churches, cars, lampposts, crops and farms are being blown away by wind gusts of up to 150 kilometers per hour. A number of buildings caught fire due to falling electrical wires and high pressure.

Serious damage also in Illinois Where, a few miles from St. Louis, on the Missouri border, dozens of workers were trapped in a collapsed warehouse roof at Amazon. And there are deaths here too: at least 6. A curfew was imposed in many affected areas, also to avoid the phenomenon of looting. The fear is that in the next few hours the weather conditions will lead to new destructive phenomena and the population is invited to take shelter in shelters.

Meanwhile, US National Guard and Civil Protection personnel from Washington were deployed to the six affected states to support local relief efforts.

As storms destroyed Tennessee. Overall, the severe disruption affected more than 55 million people across the United States, and nearly 157,000 residents in six states were kept in the dark due to power grid problems.