Persia Digest
Home entertainment Was the movie filmed with Jean Dujardin in the real village of... 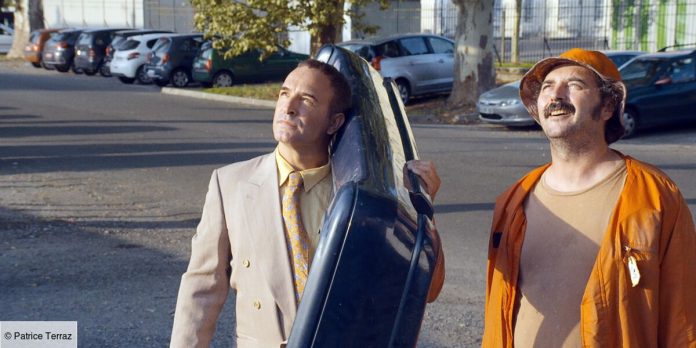 Tonight, Arte is broadcasting I Feel Good, a social comedy by Gustave Kervern/Benoît Delépine duo. For the purposes of photography, Jean Dujardin found himself in the village of Emmaus located in the Pyrénées-Atlantiques.

For the past fifteen years, Benoît Delépine and Gustave Kervern have been tracing their path, uniquely and uncontrollably, into French cinema. since their first trials (UltraAnd aveda), very inspired by Finnish director Aki Kurismäki, until recently clear date, the two former rioters Groland They never stop scrutinizing contemporary society, professing their love for the marginalized, misfits, and villains. In 2012, they presented meticulously The big night At the Cannes Film Festival in a cute brothel. During the call, the filmmakers and their main actors, Benoit Boelford and Albert Dupontel, destroy the office in front of which the stars stand. It’s also covered in Brad Pitt pictures for the movie Cogan. A disrespectful attitude tempts Jean Dujardin, who suggests they make a movie together. A collaboration that only materialized in August 2017, with the shooting of their comedy movie I feel good.

I feel good, and it’s a soft and sour tale

In this film, Jean Dujardin plays Jack, a broken loser, who reaches for his sister, Monique (Yoland Moreau), at the head of the Imus community. She agrees to shelter her brother for some time in exchange for activity with the members of the association. However, Jack, a resolutely liberal, believes that he has an idea to make a lot of money quickly: organizing trips to Eastern Europe in order to offer plastic surgery at discounted prices to people in need. An opportunity for Kervern and Delpin to evoke an anecdote, tender and caustic, about France today. ideaI feel good It comes from their encounter with a place: the village of Emmaus Liskar Pau, in the Pyrenees-Atlantic. Discovering this alternative, self-managed society thanks to their friend Jules-Edouard Moustic (former presenter of JT de Groland), Gustave Kervern sees cinematic potential in it: “The film was born from the place, and the way the place welcomed us. Acceptance of the Companions is not given to everyone. A salon in Gharbi…”

In order to be accepted by 130 companions of Emmaus who are active in the largest village of its kind in France, the film crew gradually goes there. Gustave Kervern and Benoit Delpin were the first to catch the pulse, then Jean Dujardin and his brother Marc, co-producer of the film, went there. The village director German Sehri soon realized that the artists’ approach was respectable: “Their first contact with Emmaüs was very humble and simple. I find in I Feel Good the human and social strength of the village, expressed with wit and humor. Benoit and Gustav were able to perfectly express our struggle and that of Father Pierre.”

Filming takes place for a month and a half, between mid-August and the end of September 2017. To shoot this slow-moving Batachon character, Jean Dujardin takes a few kilos, thanks to a croque-monsieur-based diet! The directors give small roles to some of the village companions, such as Gérard who told his experience to our colleagues from Grazia : “I’ve been with Emmaüs for 7 years. I invested a lot in it and that’s why I ended up in the movie: as soon as they needed something, I was there. Who would have thought I’d end up on the big screen. It’s a beautiful movie because it’s realistic and believable.” As James Brown sang, I feel good…and you, too, by discovering this evening a nugget of the Kervern/Delépine duo.

Perfume helps against everything: “Lear” in the Bavarian State Opera