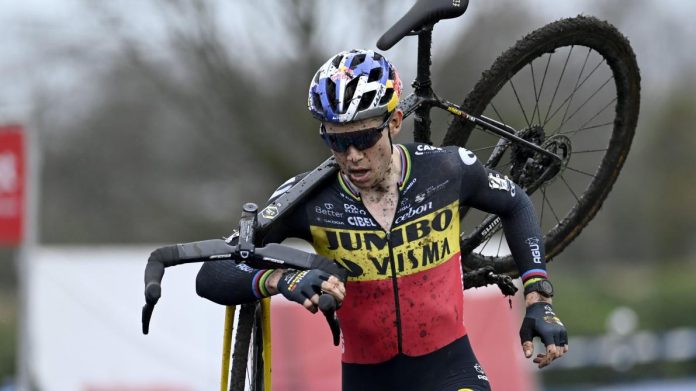 WHaut van Aert (Jumbo-Visma) won a cross pass at Loenhout on Thursday, in the third of the eight events of the X2O cyclo-cross Trophy. Athlete of the Year, who also took home the Gala du Sport that morning, dominated the race, winning his sixth cyclocross in as many races since entering the plowed field on December 4 at Boom.

“I still miss the crowd today, it’s a bit like a cafe without beer,” declared Wout van Aert, citing Team Jumbo-Visma before the contested race started (almost) without spectators.

His big rival, Dutch world champion Matteo van der Poel, decided to take a break after feeling a backache during his second spinning cross of the season on Sunday at Heusden-Zolder at the World Cup. Dutch European champion Lars van der Haar also rejected the call on Thursday at Lonehout, who has injured a knee since Neil fell on November 11. Briton Tom Bidcock had decided to ignore him in the race at Baal on Saturday.

Wout van Aert won ahead of Michael Vanthourenhout, second with a time of 14 seconds, and Toon Aerts, third, with a time of 27 seconds, who maintained the lead in the general classification and consolidated his lead. Toon Aerts now leads Eli Iserbyt 2:01, 14 only on Thursday at 1:40.

At the women’s level, Lucinda Brand of the Netherlands defeated her compatriot Denis Betsima, the second, with a time of 15 seconds, and Sherine Van Aneroy, the third, with a time of 30 seconds. This is the thirteenth victory of the season for the world champion.

Another Dutchwoman, Céline del Carmen Alvarado, who triumphed in the last edition in 2019, had to settle for sixth place, just behind Saint-Kahn and ahead of Marion Norbert Rebrol, the first two Belgians to finish the race.

In the general classification after three events, Betsema is still ahead of Lucinda Brand, but now by 1:28.

The next two X2O Cup meetings are scheduled for Saturday at Baal for the Sven Nys Grand Prix and at Herentals on January 5th. Between the two, the seventh and final round of the World Cup will take place in Holst on Sunday in the Netherlands.

Thibau Nys, Team Athlete of the Year at the Sports Gala, won Thursday at Loenhout, their first under-23 success.