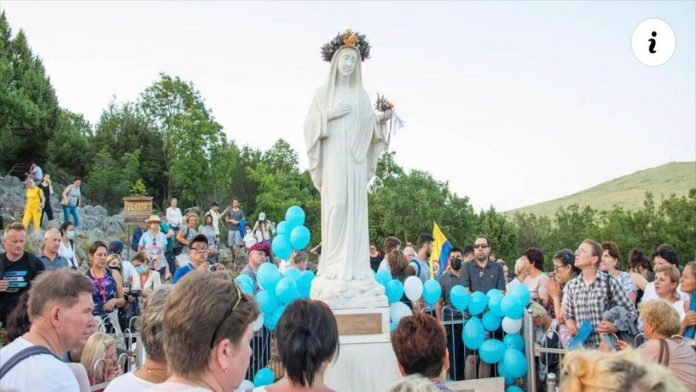 On the occasion of the fortieth anniversary of the apparitions of the Queen of Peace, a testimony rich in faith comes from Medjugorje.

The story of a year was complicated for many by the pandemic, but for those who describe it, it was an experience of faith that continued despite all the hardships. So much to enrich the more light that is already in his heart.

40 years ago, it was 5.40 pm on June 24 forOur Lady appeared in Medjugorje, there on the hill, to six boys. At first, everyone thought that these guys were lying, that they made up, and even worse, that they dreamed about everything. But who would have imagined that the grain of faith that fell on that earth would have brought great fruit to prayer and blessings throughout the world?

In this epidemic yearMany who were frightened, and saw the churches nearby, or worse, saw their faith weaken more and more. But there is someone who lived this year strengthening his prayer, climbing that hill, practically waiting for the messages of the Virgin and not letting himself be intimidated by cold, frost, bora or rain. .

“We have completed 365 days of climbing the mountain From the first apparitions. We used to go every day to Podbrdo at 5 am, pray 3 rosaries and other prayers and also read the letter that Gospa gave us all these years– says the man in his testimony.

Amazing is the feeling of such a sense of grace that pervades not only those who say, but also those who have walked this path with him: “It was a huge blessing To be able to hear his beautiful words of consolation, education, encouragement and love“.

“We did all this and he was born spontaneously”

But how did it all start? “It all started spontaneously and without a project but we had an idea why We all knew Father Slavko well. This was his spirituality. Every day at least early in the morning, and then the day is really in the right place, in your hands. All this can be done wherever you are, Because there is no place without God, but I think it is very important to read his messages, because they explain everything– He continues in his story.

Today, on the day of remembrance of the apparitions, this phase ends throughout the year: “This morning we read the past remembrance message, and you say we live in a time of grace, and I can tell you firsthand that it is true. At the place of the first apparitions I met someone Those who followed us live every day, and only yesterday I was able to arrive from Italy to conclude these 365 days with us“.

Read also: Medjugorje, message of the day: “My children, help me!”

Medjugorje: We go with faith and courage

A story that ends with a very specific statement:You can come to Medjugorje, but only with faith and courageBoth are from prayer. So it is not enough to say you want to come, but come. It is necessary to be full of bliss in the times we live in نعيش– We conclude.

Hopefully, our country’s ban on going there will soon be over, and we can go back to climb that hill, touched by the grace of Our Lady’s presence. The epidemic did not stop faith and Medjugorje is a concrete example of this. The hope is that we learn from them we are in Italy.

Read also: Medjugorje: “God has not forgotten us” – video

Completeness of information is in everyone’s interest. For this, we ask you to suggest additions or changes and to report any errors or errors in this or other Lalucedimaria.it articles by writing to the following address: [email protected]

Apostolic visit to Colonia about ill-treatment and cover-up

The public ignored Biden and Obama, and the Republicans are riding...

GB: Johnson’s government is cut and two ministers leave – the...