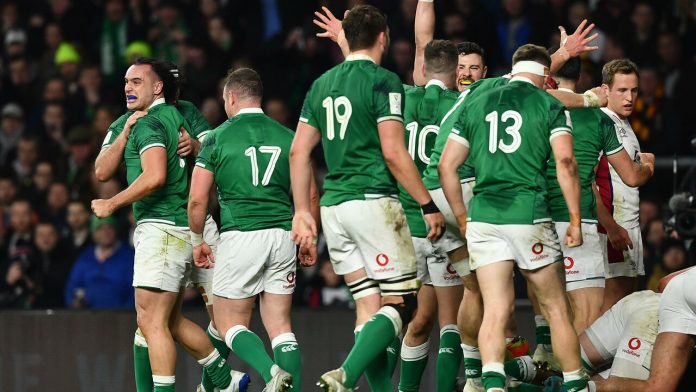 Twickenham (United Kingdom) (AFP) – The “final” dream against France in a week turned out to be a nightmare: England twisted the ball on Saturday before Ireland (32-15), now the last team to miss the Blues’ first grand slam since 2010.

The XV de la Rose, at Twickenham, reduced to 14 from the second minute, can no longer win the match, so all will be played at a distance from Ireland (2nd, 16 points), Scotland and France (1st, 18th points), which will challenge the English.

The good news for the Blues: If they have lost two of their last three matches against England, their only win comes at the start of the 2020 tournament at their Dionysian campus (February 24-17).

During the Fabian Galthié era (27-23 against Scotland in March 2021, Ed.) Eddie Jones’ men believed they would ruin the French party by surprising the Blues in the State of France. First Grand Slam since 2010.

Blame it on a match where almost nothing happened: after 82 seconds their second-rowers were reduced to fourteen for a red card against Charlie Evils (the fastest dismissal in match history), and then the English agreed to the attempt of winger James Lowe. (6th) Then third-ranked Tom Curry lost by injury (15th).

“Sorry, good game”? Knowing Rose’s XV is bad. It certainly does not have the agility of its predecessors, but this team, in the intensity of change, has some support.

Maro Itoje’s team, having been uncertain until the last minute due to illness, waited a long time against one of the best teams of the moment, before giving up at the end of the match, before getting two tries from Jack Conan (72nd) and Finley Peelham. (76th).

After all, the English showed that they had qualities, especially by using the intimate scrum or Irish strain. The skill at the feet of Marcus Smith (5 of 6 successful penalties) did the rest.

Fabien Galthié’s men warned: You must always be wary of the English.