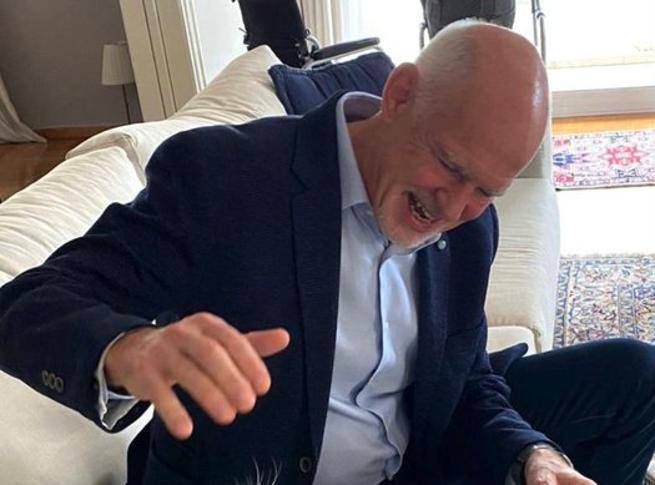 The former prime minister who is running for the presidency of the center-left: Merkel wanted to hurt us. About Scholz: The economy has changed, we must give dignity or respect to everyone

TheOn the left, it should give people a sense of respect and being listened to.

Georgios Papandreou It goes back to Agor the Greek politician. The last Socialist prime minister to contest Sunday’s primaries for the presidency of the Movement for Change, the centre-left party, which also includes the former PASOK. Papandreou, 69, was forced to resign in 2012, in the wake of the financial crisis, when Europe’s leaders and internal rivals rejected his idea of ​​holding a referendum on austerity measures.

After all these years, what motivates you and why do you think you can make a difference?

The financial crisis It was a painful time for the Greeks, the Greeks, and me too. I had to make very difficult decisions. But people now understand that they were right and that all the governments that came after that followed the same path. The Greeks also realized that the failure was not the fault of the PASOK, but the fault of the previous right-wing government. There was also the EU’s responsibility, for the way the crisis was initially handled, when Greece was accused of being the Black Sheep and not being helped in making changes. Then came Mario Draghi and calmed the markets. Of course, we had our responsibilities as well, but I am proud to say that the reforms undertaken under my government, against corruption and transparency, were correct. At the time I was talking about green investments and people were looking at me strangely. I think I can combine the party with the progressive forces that are prevalent today.

See also  Holidays abroad with anti-Covid permits, a jungle of bases for tourists

She returns to the field at a moment of rebirth of the left in Europe: Norway, Sweden, Italy and not least Germany. New dynamic? What are the driving thoughts?

We need to make our core values ​​relevant to today’s world. The economy is more diverse than it was in the past, but we must give dignity, or respect as Olaf Schultz says, to everyone. There is a lot of insecurity. There is a global phenomenon of precarious workers, tens of millions of people working with starvation wages and with no guarantee that even the next day they will get that job. It is essential to ensure basic income, health care, education, and affordable rents: everyone has the right to be treated with dignity and respect. It is also necessary to reassure people in the face of major crises such as epidemics, climate change and migration.

Speaking of immigrants, what is the agenda of the modern left?

Listen to the voices of people who have the perception that they are not. Having a voice is a critical component of democracies. The left must return to the idea of ​​”isegoria,” the equal right to speak, one of the democratic principles of ancient Greece. More participation and less concentration of power is needed, undermining democracy. Today very few players – big platforms, financial and pharmaceutical industries, etc. – dominate the field. The fine imposed by the Italian Antimonopoly Authority for the commercial use of important personal data. When people understand that they have no influence, fears arise and the culprits are sought. Populist forces feed on this. We have to give people a sense of their dignity. With regard to immigration, it is necessary to follow two principles: first, to build a culture of solidarity with those fleeing wars, famines and dictatorships because they are not invaders but people who admire our values ​​and try to integrate them. Second, keep the numbers in check. It is not an easy issue, but the need to integrate must go along with the citizens’ sense of safety, so that they do not feel forgotten.

Should Europe fund border barriers, as Poland, Hungary, and even Greece demand?

We must regulate migratory movements, and remain clear about human values ​​and duties. I don’t think the barriers will work in the end. But we must also help countries of origin become more stable, prosperous and democratic. The West bears a lot of responsibility for what happened in Afghanistan, Syria and Libya. The difference between us and the Right is that we believe in global cooperation to solve these problems. We must also change the immigration narrative. I was a refugee, as were Bruno Kresky, Willie Brant, and Andreas’ parents, who later became leaders in their own countries. Once, at a rally in Sweden, Olof Palme introduced me by saying, This is Georgios Papandreou, a refugee and we should see him as an engineer for a new company in his country.

The growing irrationality is showing up in our societies: no corrupt, conspiracy theorists. How should the left deal with the problem?

Walking around or treating these people with disdain does no good, it only reinforces their beliefs. We must look at the deeper causes, which take us back to the issues already discussed. I would like a more just, attentive and inclusive society. In the vaccination campaign, we must sit down with clinicians and communities and listen, and make these people part of the solution rather than part of the problem. We need to help them become new citizens.

She returns to the field like her opponent, Angela Merkel, leaving the scene after 16 years. Did this coincidence face retaliation?

She was not my enemy, she was my conversation. At the time of the financial crisis, Merkel was not of the opinion that it could be closed in a manner dignified by Greece and the Greeks. The only thing that still hurts today is that the Greeks were referred to as lazy, corrupt, dishonest. Merkel recently returned to Greece and admitted that it was very difficult at the time. I remember his obsession that austerity measures should hurt. Perhaps one day we will talk about it in a relaxed way. I am lost convinced that she really thought it was in our best interest to learn. Nice Merkel personally. But he did not realize that we are seeking real change. It wasn’t just about the economy, our institutions were weak and open to fraud, corruption, nepotism, and backdoor deals. I started to change, but I needed time. I had hoped the EU and Germany would concede, but that didn’t happen and we know the consequences. In fact, Merkel used the markets to pressure us. Over time, he has undergone a major development, realizing the need for solidarity and understanding between Europeans, whether immigrants or Donald Trump. change for the better.

How will it be remembered in Greece?

There will always be contradictory feelings. People will remember that they were unjustly punished. But it held Europe together and eventually, with the next generation of the European Union, took a big step toward financial solidarity.

Orca in the Seine, acoustic stimuli to propel it towards the...