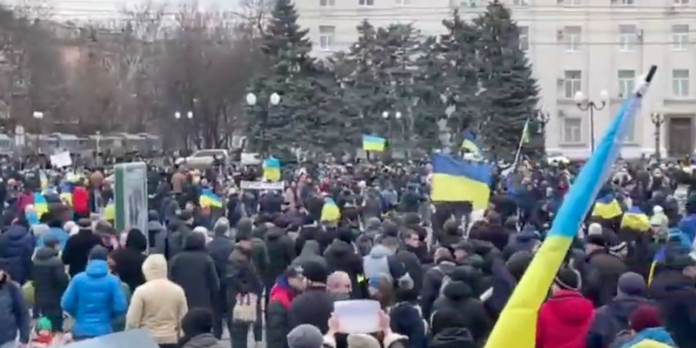 Throughout Saturday, protests erupted in some Ukrainian cities that have been occupied by the Russian army in recent days. One of the most popular took place in Kherson, a city in southern Ukraine, which was by far the largest invasion by Russian forces.

A crowd turned out to protest against the Russian occupation in Kherson, occupied by Russia.
pic.twitter.com/nJKkiD7U8i

On Saturday, thousands of people demonstrated, carrying Ukrainian flags, against the Russian invasion. The mayor of the city, Igor Kulekhaev, said that at one time Russian soldiers fired in the air to disperse the crowd: however, at the moment, there are no reports of wounded. From one of the videos posted on social networks, it also appears that one of the demonstrators took control of a Russian armored vehicle.

in occupied # Khersonman with # ukrainian Get the flag on #Russian Armored personnel carrier. pic.twitter.com/nJTY23WwVQ

– Read also: Assets captured by Italy from the Russian oligarchy

Kherson, with a population of nearly 300,000, captured on Wednesday after a long and hard fight, is located near the mouth of the Dnieper River, a few kilometers from its mouth in the Black Sea, and Russia considers it a strategically essential invasion to block the Dnieper. Ukraine’s access to the sea.

The Kherson protests are of particular importance in understanding how obstinate the Ukrainian resistance to Russian occupation is, and how difficult it is for Russian forces to manage occupied cities. Kherson is actually a city half of whose residents are of Russian origin and speak Russian, yet the population is largely opposed to the invasion of Russia.

Another large city that had a very participatory protest on Saturday was the city of Zaporizhzhya, in southeastern Ukraine, which Russia occupied on Friday morning, a few hours after that time. He also carried out an air strike near the city’s nuclear power plant (the largest in Europe).

In Zaporizhia, the city of Cossack glory, thousands came to join the territorial defense forces to protect Ukraine from Russian invaders. The only thing we ask of our partners in the European Union and the United States is combat aircraft and air defense, and we will do the rest ourselves. #protect the sky #Ukrainian_Victory pic.twitter.com/82VNRsFFab

Large protests also broke out in other cities in the southeast, such as Berdyansk and Melitopol, where hundreds of people marched with Ukrainian flags singing the national anthem. In Melitopol, where there have already been various protests in recent days, Russian soldiers fired into the air to disperse the demonstrators. Like Kherson, Zaporizhzhya, Melitopol and Berdyansk are cities whose conquest is very important for Russia: they are in fact the main cities of the homonymous Zaporizhia region, which overlooks the Sea of ​​Azov, a sea between Ukraine and Russia. , which is bordered on the west by the Crimea. Their invasion effectively removes Ukraine’s access to the Sea of ​​Azov, which is connected to the Black Sea through the Kerch Strait, and thus limits its ability to receive assistance by sea.

– Read also: Can Russia be excluded from the Internet?

In Melitopol, unarmed Ukrainians face Russian soldiers. They shout “passengers” and push the vehicles back. pic.twitter.com/PMges2cHhU

In Novopskov, a small town in northeastern Ukraine, Russian soldiers shot some protesters, wounding at least one of them.

The first case of Russian forces shooting a civilian during the protests.
Novobskov, Luhansk Oblast pic.twitter.com/QDmZVVFqb4

Living on the Brink, Nathan Prater is Crazy: A Shocking Change....