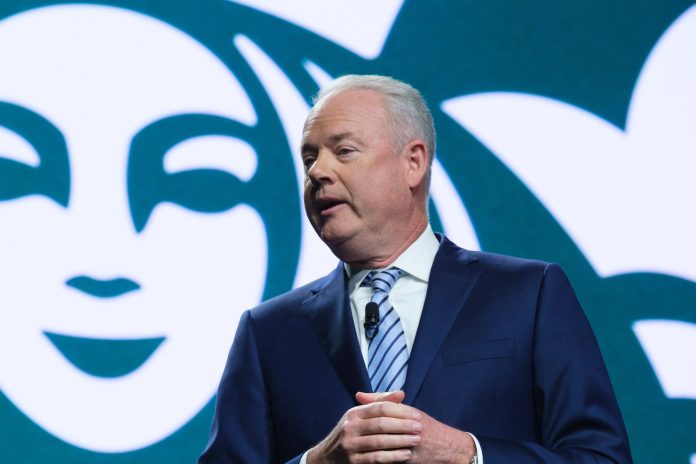 This article has been translated from our English version using artificial intelligence techniques. Errors may exist due to this process.

It’s the end of the Starbucks era, and we’re not just talking about retiring the flavor of a seasonal drink.

Wednesday , The company announced That Kevin Johnson, who has served as president and CEO for the past five years and has worked with the company for more than a decade, will retire on April 4. He will continue to act as a partner and advisor. to the Starbucks Board of Directors.

Although Johnson’s successor has not been announced, the company has shared that former CEO Howard Schultz will return and take over as interim CEO with a $1 compensation, describing the position as a “voluntary position,” where he will also return. to the board of directors. . A permanent leadership position is expected to be announced this fall.

RELATED: Starbucks is giving up its premium mugs

“A year ago, I indicated to the Board of Directors that with the global pandemic coming to a close, I would consider withdrawing from Starbucks. I feel this is a natural end to my 13 years with the company. As I make this transition, we are very fortunate to have a founder who can step in on a temporary basis, This gives the Board time to continue to explore potential candidates and make the right long-term succession decision for the company.” Johnson said. at company statement . “I have enjoyed every minute of the work and am proud of what we have achieved together. It has been an honor to serve the 400,000 members of the Starbucks Green Arena around the world and I want to thank them for their service, resilience and optimism.”

Schultz will assist the Starbucks team in the process of finding the next CEO, as well as “mention and prepare” who the team selects.

“When you love something, you have a deep sense of responsibility to help when it is asked. Although I had no plans to return to Starbucks, I know the company must transform once again to face an exciting new future where all of our stakeholders mutually prosper. ” Schultz said .

Starbucks made headlines this week when it announced that it will phase out its iconic green and white plastic cups and switch to a more sustainable model by 2025.

Related: How the CEO of Starbucks turned a small coffee bean store into a hugely successful global brand

The goal would be for customers to switch to using their own reusable pots and cups instead of using one disposable per order, incentivizing those who are reluctant to make the switch and requiring those who don’t bring their own to pay a deposit for a cup they can carry with them and then return, It is called a mug loan program.

“Our cup is everywhere, and we love it,” He told CNN Starbucks President of Sustainability Michael Cobori . “But it’s also this ubiquitous symbol of a disposable society.” Mugs are single use, after all, and most people probably find them in places where they shouldn’t be, like on a roadside or in a lake.

Starbucks shot more than 7.3% in the 24 hours through Wednesday morning.

Signing of a partnership agreement between “Covina” and “Orange Mobile Finance”...

Alert has been raised at Gare du Nord, traffic is still...