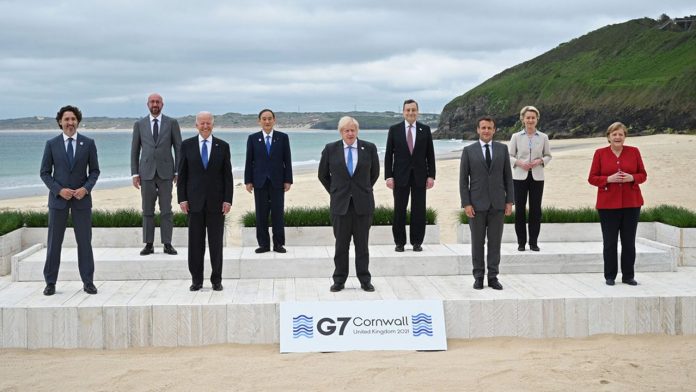 In the UK’s Carbis Bay, leaders of developed countries re-ignited the G7 forum flame on a number of topics while reaffirming their values.

Providing vaccines to the poorest countries was one of the main themes of this G7 summit. At the end of the discussions, the G7 leaders pledged to provide the equivalent of one billion doses of vaccines over the next year. Within a year, 870 million doses, half of them by the end of the year, will be given directly to the Covax device. This brings its total commitment since the beginning of the epidemic to two billion doses. The G7 goal is to vaccinate 60% of the world’s population by the end of 2022.

US President Joe Biden has pledged to donate 500 million doses of the Pfizer-BioNTech vaccine. Boris Johnson has indicated that the UK will donate at least 100 million surplus vaccines. On Sunday, Emmanuel Macron said France would double its donation of doses to 60 million by the end of the year. The European Union will also seek to export 700 million doses by the end of 2021, according to European Commission President Ursula von der Leyen.

In addition, the leaders want a new investigation by experts from the World Health Organization into the origins of the Covid-19 pandemic, especially in China. The Group of Seven (G7) intends to shorten the development cycle for safe and effective vaccines, treatments and tests from 300 to 100 days.

Regarding the lifting of vaccine manufacturing patents, the G7 members pledge to continue constructive discussions at the WTO level. But they note the “positive impact” on the global supply of vaccines for “voluntary licensing and [du] Transfer of technology on mutually agreed terms.

A few months before the 26th session of the Conference of the Parties (COP) takes place in Glasgow, Scotland, the leaders of the Group of Seven industrialized nations have pledged once again to increase their contributions to financing the fight against climate change. Their goal is to meet a commitment to spend $100 billion in public and private resources annually through 2025 to help the poorest countries reduce carbon emissions and deal with global warming.

Developed countries’ pledge in 2009 to pay $100 billion annually by 2020, in part due to the pandemic, has not been met. G7 leaders also outlined measures to reduce carbon emissions, including ending most direct public subsidies for the fossil fuel sector offshore and phasing out gasoline and diesel cars.

The G7 countries pledge to become carbon neutral by 2050 at the latest and reduce carbon dioxide emissions by 50% by 2030, compared to 2010. In terms of biodiversity, the goal is to conserve or protect at least 30% of land and oceans by 2030.

The heads of state and government of the Group of Seven ratified the agreement reached by their finance ministers a week ago on the basis of global tax reform. The G7 fundraisers agreed on the principle of establishing a minimum global corporate tax rate of at least 15% and on taxes at the national level for the world’s largest companies, particularly digital giants.

Agreement has yet to be reached at the level of the Group of Twenty and the Organization for Economic Co-operation and Development. At this point, many developing countries that are members of the Group of Twenty supported the view of the G7, such as South Africa, Mexico and Indonesia, whose finance ministers signed a forum to this effect in the “Washington Post”. Beijing has not yet revealed its game.

Beijing and Moscow in the crossfire

The shadow of China hovered throughout these three days. The Group of Seven developing countries offers a broad program for their infrastructure. A project whose primary goal is to counter the growing influence of China with the “New Silk Roads”. The program will enable partnerships to meet needs in this area by 2035. If the White House had estimated them at $40 billion, the G7 press release did not mention any specific number.

The G7 leaders agreed on the need to find a coordinated approach to respond to unfair competition from China. They also called on Beijing to respect human rights in Xinjiang and grant Hong Kong a high degree of autonomy. The G7 leaders also called on Russia to “stop its destabilizing activities” including interference, respect human rights and “hold accountable” those responsible for cyber attacks from its territory.

François Barwin, former head of the Arab Monetary Fund, has been...