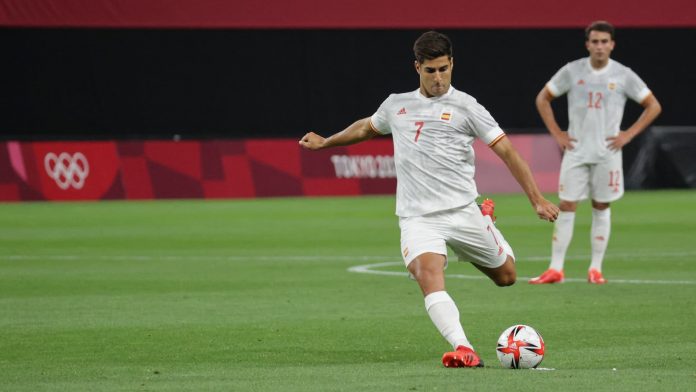 The most prominent candidate in the Olympic football tournament, Spain conceded a tie in its first match in the 2021 Olympics against Egypt, on Friday in Sapporo (0-0), despite the apparent dominance. Oscar Mengueza and Dani Ceballos are out due to injury.

It’s the start of a tournament to forget for Spain. Engaged against Egypt on Thursday at the Sapporo Dome in their first match at the 2021 Tokyo Olympics, La Roja conceded a tie despite great dominance. Like its older sister at Euro 2021, the Spanish Olympic team held the ball (62% possession) and had the most chances (10 shots vs. 3).

But nothing works. The Egyptian defense did not give up and Spain left this match with a small point and some doubts, with Oscar Mingiza and Dani Ceballos injured. The first came out after twenty minutes of play, and the second gave way in the first half, hitting an ankle, not knowing if the two would be able to continue these games.

Expected recovery from Sunday against Australia

For the Spanish national team, this draw is disappointing, because La Roja is the favorite in the competition. The regulation obliges La Liga clubs to give up at least one player for the Olympic selection, allowing Spain to field eleven players more competitive than France or other teams.

Among the winners on Thursday were Unai Simon, Pau Torres, Pedri, Dani Olmo and Mikel Oyarzabal, who reached the semi-finals of Euro 2021 with Spain in early July. Despite this tie, La Roja’s chances of qualifying for the quarter-finals are not in question. But Spain will have to respond on Sunday in its second match against Australia before facing Argentina next Wednesday.