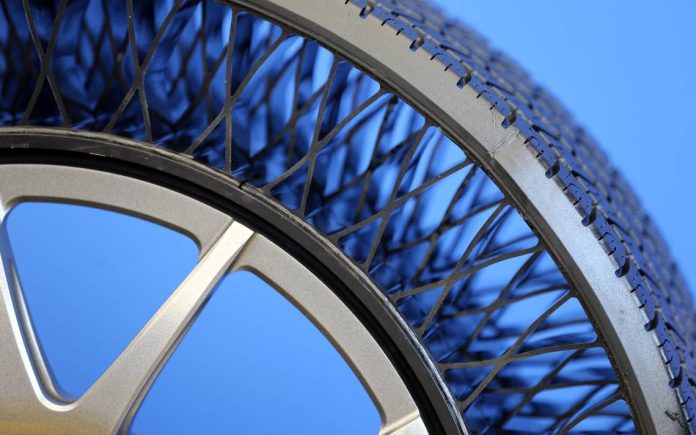 Maintenance-free air-resistant tires could soon be installed on pickup trucks as a springboard to revolutionize automobiles, giants like Goodyear, Michelin and Bridgestone believe.

At the Goodyear test track in Luxembourg, a group of journalists tested a Tesla with airless tires.

The thin layer of rubber in contact with the asphalt faces a formidable physical challenge: support the vehicle’s weight and absorb the shocks just like conventional tires, doing so for thousands and thousands of kilometers.

The challenge seems to be gradually being overcome. The tire’s rubber and plastic construction easily withstands tremendous stress as the car bends through the curves of the test track.

The ride with the tested model is smooth, however, the grip on the ground is not good with conventional tires, and the tires are noisier.

These models have been tested for 120,000 kilometers, at speeds of up to 160 kilometers per hour, both in scorching temperatures and in the middle of snow, said Michael Racchetta, Goodyear’s activity manager in the field.

“The most obvious advantage is that it is puncture-resistant. It will never fall off, and it can go through any nail and not lose performance,” Racchetta explained.

In addition, airless tires will be maintenance-free for drivers, who will not have to check and adjust the internal pressure, the expert added.

Plus, he said, there’s a second generation of tires in lighter, quieter action and better rolling.

Michelin, in turn, launched the Tweel, an airless tire but for now only for construction vehicles and not for passenger cars, whose demands in terms of driving performance are much higher.

See also  With this hybrid, we're just one step closer to our first 100% electric Corvette.

The French company also introduced the Uptis passenger car model, which was developed by the American automaker General Motors.

The two companies hope the model can make the leap to dealerships early next year.

Their researchers focused on a mixture of fiberglass and resin to stabilize the rubber in the new tire’s body.

“We will continue to have pneumatic tires for several decades,” he said.

Goodyear, which filed its first patent for airless tire technology in 1982, has recently ramped up research and development efforts.

The American company aims to have a long-lasting, maintenance-free, air-tight cover for cars by the end of the decade.

It already has a prototype of buses and automated delivery vehicles on college campuses.

Bridgestone, for its part, hopes to have an airless tonneau-ready model within a decade, having tested previous versions in SUVs.

Other manufacturers doubt that airless tires can provide a level of shock absorption comparable to conventional tires, and can also reduce noise sufficiently.

On the other hand, researcher Ulf Sandberg of the Swedish National Institute of Road and Transport Research, who is working on a model of a truck antenna cover, believes that it could become a viable alternative.

“I think the airless tires will be delivered sooner or later,” he told AFP.

“If rolling resistance is reduced by 50%, it will increase the range of vehicles by 25%, which can be very valuable” for automakers, especially for electric vehicles, where range is a priority.

For the Highest Only: Nissan introduced its new Z Coupe with...