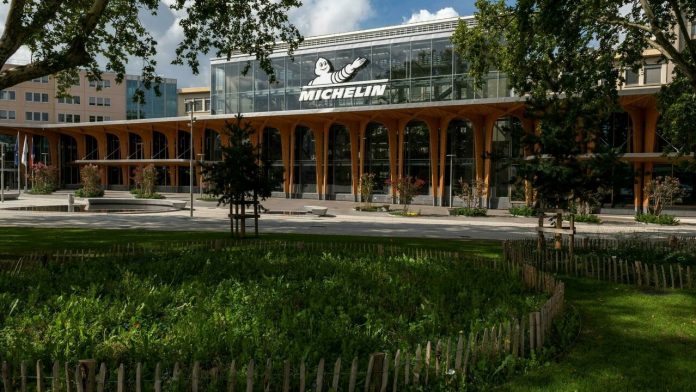 The Michelin tire group is opening its revamped headquarters Monday, at the Place des Carmes in Clermont-Ferrand, a symbol of maintaining its “steadfastness” in its home city, according to its president, Florent Ménigo.

The brand new reception desk features a 160 meter facade that is ornate and lined with majestic wood blinds made of Douglas fir from Corrie’s.

Inside, the bright lobby has a central staircase that leads to the upper floors with meeting rooms and flexible spaces. The rubber greenhouse, open to visitors, has been preserved, and a café, open to the public, has also appeared.

“This new reception building is a symbolic place for the opening and consolidation of Michelin in its territory,” Florent Minnegot told AFP before the opening.

“We needed to have a seat at the height of what Michelin stands for, making France shine and making Clermont-Ferrand known all over the world,” he continued.

He added that the group, which has 123,000 employees, “continues to invest in its region and in the Auvergne-Rhône-Alpes. Its headquarters are in the provinces and territories and will remain so”.

The company is one of the few in CAC 40 to maintain its headquarters, where more than 3,000 employees work, in the provinces.

The site benefited from a budget of 20 million euros funded by Michelin, while the group announced a competitive plan at the beginning of the year providing for the abolition of 2,300 jobs over three years, mainly in Clermont-Ferrand.

“There are phases of contraction, but there are also phases of expansion. Michelin is investing heavily to reposition its Cataroux site in the city centre, through an ambitious project centered around four poles: education – training, sustainable materials – biotechnology, innovation and finally sports and center The health facility is open to the city,” the group leader noted.

At the same time, Clermont-Ferrand has redeveloped the Place des Carmes, where the headquarters is located, for 11.8 million euros, with green spaces, a water wall and several fountains.

“This renovation is part of an intelligent dialogue with the company, which wanted to renovate its headquarters. It says something about the new way of visualizing urbanization and the ecological transformation of the city”, confirmed Clermont Mayor-Ferrand Olivier Bianchi.