Persia Digest
Home science Why not ask for the Clermont-Ferrand tax phone number that Google points... 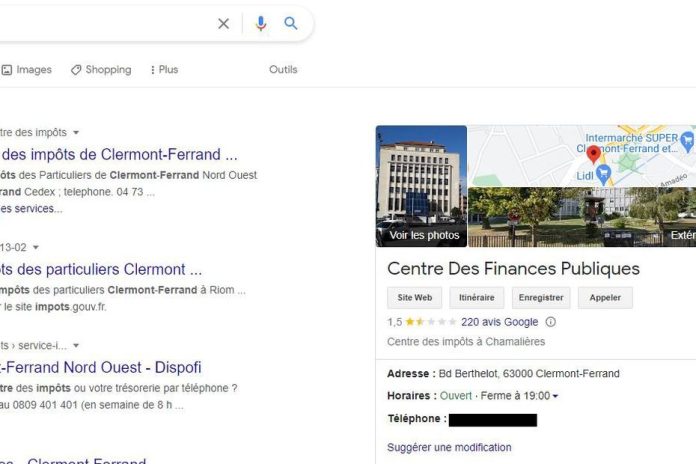 At the end of June, the scammers changed the phone number of the Google page of the tax center in Clermont-Ferrand. The Public Finance Center is calling for the public to be vigilant because users have managed to fall into the trap, giving out banking information and withdrawing their accounts. We show you how not to fall into the trap.

Scammers have more than one trick up their sleeve. The tax center in Clermont-Ferrand was just a victim. The Google page of the public finance center in the capital of Auvergne has been hacked. Someone changed the switchboard phone number. Thus, if you dial the indicated number, the individual answers the phone. Next, it asks for your identity items and asks for your bank references. The Public Finance Department claims to be a victim of this trap for the first time. Says: “We were informed of the incident yesterday. Identity theft goes back to yesterday because a week ago the information was still correct. The phone number provided is correct.She continues:We learned that someone was a victim of this and withdrawals were made. There is at least one victim“.

The department management explains how the scam works: “When you are a user who looks up the phone number and goes to Google to get it, by calling that number you can call the complicit partner and you will be asked to state your identity, date of birth and banking institution, which is very surprising because public finance officials have never asked for this kind of information over the phoneCurrently, the number indicated on the Google page is still wrong. Caution is advised: “We will make sure that changes are made to the Google Sheet or deleted. But in the meantime, since these changes can take time, we wanted there to be a connection that could be made so that people of good will not fall into this trap.“.

The Directorate General of Public Finance filed a complaint on Friday, 1 July at the Clermont-Ferrand police station. Vigilance:Location www.impots.gouv.fr It is the official website: it is really known for its ergonomics and the quality of its information. On the site there are geolocations of addresses according to the address you specify. We make it more reliable on an almost daily basis. It is the only authentic site. In addition, on the phone, public finance officials do not ask for bank detailsThe scammers have even changed the tax office’s working hours, until 7 pm, so that the trap can operate on a larger scale. The record for the tax office in Clermont-Ferrand is 04 73 43 20 00.