Persia Digest
Home World A Russian plane with 200 passengers on board landed and was detained... 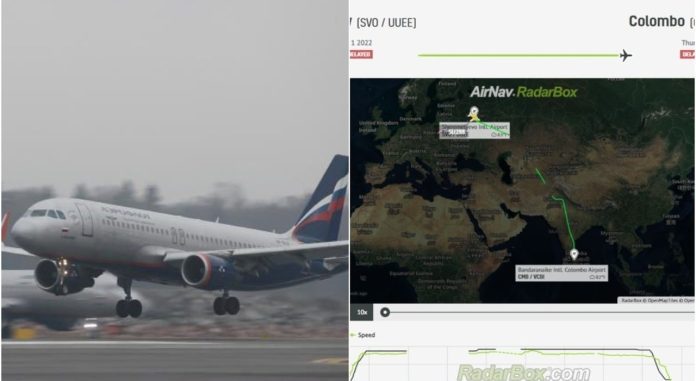 voltage between Russia And the Sri Lanka. According to the local newspaper, “News First”, the authorities of the Asian state have landed a Russian civil aircraft belong to the company”AeroflotAnd they issued Arrest warrant for the plane.

Russia and China slow to deliver aid: Tensions with the Kremlin

A Russian plane has been seized for stopping

The Colombo High Commercial Court was due to issue an arrest warrant following an appeal by Irish company Selective Aviation Trading Limited, which is linked to aircraft lessor GECAS. After Western countries imposed sanctions on Russia, Air charterers have asked Moscow to return the chartered planes for fear of secondary penaltiesRussia Today stated that the restrictions prevented them from entering into financial transactions with Russian airlines.

However, Russia kept most of the planes, arguing that their return meant one of them Violation of signed agreements. Russia has also begun registering planes in their country so they can continue to operate, and according to the Airfleets portal, the plane impounded in Sri Lanka obtained a Russian registration in late April, while it was previously registered in Bermuda.

An Airbus A330-343 operated by Russian state-owned airline Aeroflot was refused permission to fly to Moscow as scheduled on June 2 amid a legal dispute with a leasing company. There were more than 200 passengers on board.https://t.co/Lh9NY6bJCP

Aeroflot has announced that a hearing for the release of the aircraft is scheduled for June 8. Russian tour operator Intourist told reporters that people waiting to return home with the impounded plane were accommodated in a nearby hotel. European Union sanctions imposed in February banned the delivery of civilian aircraft and spare parts to Russia, as well as their maintenance and security. In addition, the sanctions forced the owners to terminate existing contracts with Russian airlines, RT recalls.

See also  Ukraine: All civilians evacuated from Azovstal. Sixty civilians lost in an attack on a school in Lugansk - the world

The response of the Russian airline

Russian airline Aeroflot has suspended flights to Colombo after the plane was seized by Sri Lankan authorities. The Russian news agency TASS reported Saturday, citing a statement issued by the airline, that the airline made the decision “because of an unreliable situation regarding the airline’s unimpeded flights to Sri Lanka.”

One of Aeroflot’s Airbus A330s has been grounded by Sri Lankan authorities as GECAS attempts to take control of the aircraft now outside Russian airspace.